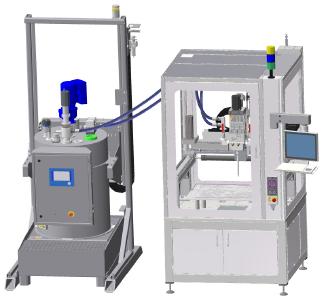 (PresseBox) ( Neustadt/Donau, 18-03-12 )
A new variant of the tried and tested Scheugenpflug barrel agitator station is now available for potting tasks with high material consumption: The system allows for the direct feeding of potting material to the dispenser without the need for an intermediate preparation stage. In addition to a significantly smaller footprint, users also benefit from time and cost savings.

Whether in the electronics industry, the automotive industry or energy technology: applications in which very large quantities of adhesive or potting material have to be processed are becoming increasingly common. This is for example the case with applications in the area of eMobility or for the production of solar inverters. For such potting tasks, Scheugenpflug has the barrel agitator station in its program, which allows the bubble-free preparation and feed of large quantities of self-leveling media.

A new variant of the proven feeding system is now available: In addition to bubble-free preparation of 200 l drums under vacuum, this system also allows the dispensing unit to be directly supplied with potting material without the need for an additional material preparation stage in the form of an A310 system. This not only reduces the required floor space, but also saves time and money. Even when the material is directly fed to the dispenser, potting under vacuum at up to 100 mbar is possible. The barrel agitator station is therefore an economical and reliable solution, especially for simple potting tasks with high media consumption.

Feeding of materials with higher viscosity is possible

The new version of the feeding system has also been equipped with an eccentric screw pump, which enables the direct feeding of the dispenser with potting material. The output reaches up to 3 l/min per component. At the same time, the eccentric screw pump expands the application range of the system: With the new variant, media with a viscosity of up to 70,000 mPa∙s can now also be reliably processed. The circulation function effectively prevents the sedimentation of the included fillers within the pipes. This means that the used potting medium is available for further processing with the same high quality, even after production breaks or longer interruptions – for example after weekends.
The SCP210 system control unit ensures a high degree of user-friendliness by facilitating monitoring, maintenance and analysis tasks and assisting the system operator in a faultless and fast production process.

The Scheugenpflug AG (Neustadt/Donau) is a leading manufacturer of precision engineered systems and machines for efficient adhesive bonding, dispensing and potting processes. The product and technology range extends from cutting-edge material preparation and feeding units and high performance manual work stations to modular in-line and automation solutions, specially tailored to customer specifications. Scheugenpflug systems are used in the automotive and electronics industries as well as the telecommunications sector, medical technology and the chemical industry. The company has four additional locations in the USA, China and Mexico as well as numerous service locations and sales partners all over the world. Due to its considerable expansion Scheugenpflug was able to double its number of employees within 5 years and now employs more than 470 staff.

Scheugenpflug changes its legal form to a GmbH