Expansion of production capacities at US Fort Mill location 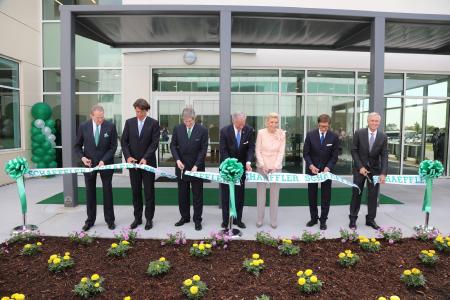 The Schaeffler Group celebrated the expansion of its Fort Mill plant based in the US state of South Carolina. At the same time, a new office building was opened which has been adapted to the new working environments of Schaeffler's "New Work" initiative. Maria-Elisabeth Schaeffler-Thumann, family shareholder, attended the opening ceremony together with Georg F. W. Schaeffler, Chairman of the Supervisory Board, and Klaus Rosenfeld, CEO of Schaeffler. The globally active automotive and industrial supplier has created over 100 new jobs at the Fort Mill location.

Schaeffler has been present in South Carolina for almost 50 years. In her speech during the opening ceremony, Mrs. Schaeffler-Thumann looked back on the success story of the Fort Mill location: “The USA as a location has always been of great importance to our family. For all those years, we have demonstrated our strong commitment to South Carolina through capital investments.” Furthermore, she pointed out the importance of employee development as part of the corporate culture and values, and stressed: “The key to success are highly-qualified employees, which is also true for the US, and I am proud of our trainee program that has been in place in the USA since 1980.”

Schaeffler has invested around 36.5 million US dollars, which equals approximately 32.5 million euros, in order to expand its production capacities of one of its two Fort Mill plants. Moreover, a new, multi-functional administration building has been set up, as well as a new plant entrance that has been adjusted to accommodate the location’s enlargement and increasing traffic. “We want to deliver long-term value as a true partner. Therefore we are committed to further grow our business in the Americas, and invest in the US in capital and in the people both in the industrial and the automotive markets,” said Klaus Rosenfeld, CEO of Schaeffler AG.

Production capacities have been increased

Expanding the plant’s production space by around 3,250 square meters has increased capacities in the areas of stamping, heat treatment, and mounting of axial bearings, which are used in 8, 9, and 10-speed automatic transmissions. The new administration building offers around 6,000 square meters of space for modern office work places and, in addition to that, a multimedia conference center, and a company restaurant.

Schaeffler also operates plants in Spartanburg and Cheraw in South Carolina in addition to the plant in Fort Mill, where the company’s US headquarters are based. In total, Schaeffler employs approximately 6,000 employees at eight plants and three research and development centers.

The Schaeffler Group is a globally active automotive and industrial supplier. Highest quality, outstanding technology, and strong innovative ability represent the basis for the Schaeffler Group's lasting success. Its precision components and systems for engines, transmissions, and chassis as well as rolling and plain bearing solutions for numerous industrial applications make the Schaeffler Group a key contributor to "Mobility for tomorrow". The technology company generated sales of approximately 13.3 billion euros in 2016. With around 86,600 employees, Schaeffler is one of the world's largest companies in family ownership. It has a worldwide network of manufacturing locations, research and development facilities, and sales companies at approximately 170 locations in over 50 countries.