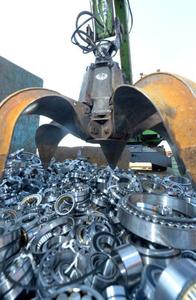 (PresseBox) ( Schweinfurt, 13-06-28 )
Rolling bearings of various types and sizes are conveyed by the gripper arm of an excavator into a scrap press with a loud crash. The bearings leave the press chopped and broken into pieces or so badly damaged that they are rendered unusable. Large-size bearings with an outside diameter of more than one meter, which are even too big for the scrap press, are destroyed with a cutting torch. All these bearings are counterfeit products marked with the INA and FAG brand, which were confiscated in raids. The objective of this operation is to make the bearings unusable.

After a spectacular operation in 2007, in which around 40 tons of counterfeit bearings were destroyed at the Schaeffler company site in Schweinfurt, and numerous other operations to destroy counterfeit goods worldwide, around 26 tons of counterfeit bearings with a value of more than one million euros were destroyed this time at the premises of INTERSEROH Franken Rohstoff GmbH in Schweinfurt. A large proportion of the counterfeit products originate from raids at bearing distributors in Europe, for example, in Italy and Great Britain. But some of the counterfeit bearings are also from Germany. "Brand and product piracy is not a phenomenon that is limited to China or South East Europe. It also takes place right on our doorstep", says Ingrid Bichelmeir-Böhn, leader of the Global Brand Protection Team at Schaeffler. "The German and European markets are no longer only flooded with counterfeit luxury or consumer goods, there is also an increase in counterfeit industrial products that are relevant to safety such as rolling bearings".

The spindle bearings, spherical roller bearings, ball bearings and needle roller bearings scrapped during this operation are only part of the confiscated counterfeit products. The majority was disposed of locally under the supervision of the relevant national authorities.

The counterfeiting of rolling bearings and the distribution of these products are consistently pursued by Schaeffler worldwide and may lead to prosecution in some cases Not only is there the threat of claims under civil law for cease and desist orders, damages and the submission of counterfeit products for destruction. But also the threat of prosecution under criminal law in conjunction with a fine and/or imprisonment if necessary. The economic losses caused by counterfeit products are very difficult to estimate. In addition to lost sales proceeds and the damage to the company's image due to low-quality goods, high costs are incurred for the investigation, confiscation and correct disposal of bearings.

Not only the companies that manufacture brand name products and conduct complex research, development and quality assurance are damaged, but also the companies who install counterfeit parts and their customers. A current case from Switzerland proves once again that significant damage can be caused by the failure of a rolling bearing when it is a safety-relevant part in machines and facilities. It became apparent due to a customer complaint by a Swiss company that a counterfeit cylindrical roller bearing was fitted during the repair of a machine. Hot running occurred after only six months, despite regular maintenance. This was noticed in good time by the customer, however, it still resulted in repair costs of around 17,000 euros, which exceeded the value of the bearing many times.

Associations such as the World Bearing Association (www.stopfakebearings.com), the German Anti-Counterfeiting Association (www.markenpiraterie-apm.de) or the Quality Brands Protection Committee (www.qbpc.org.cn) ensure that the public is informed about the risks caused by the use of counterfeit industrial products. These organizations also work in conjunction with the authorities with the objective of creating the legal and organizational prerequisites to effectively fight counterfeit products and protect manufacturers and customers as a result. In general, it is always best to comply with Ingrid Bichelmeir-Böhn's request only to purchase goods from a source that is 100% reliable, i.e. from manufacturers and authorized distributors. In the case of any uncertainty that distributors and customer may experience during incoming goods inspections, Ingrid Bichelmeir-Böhn and her team can be contacted at piraterie@schaeffler.com.

Schaeffler with its product brands INA, LuK and FAG is a leading provider of rolling bearing and plain bearing solutions and of linear and direct drive technology, as well as a renowned supplier to the automotive industry of high-precision products and systems for engines, transmissions, and chassis applications. The globally active group of companies generated sales of approximately 11.1 billion euros in 2012. With approximately 76,000 employees worldwide, Schaeffler is one of the largest German and European industrial companies in family ownership.

The Industrial division supplies components and systems for around 60 industrial sectors via its worldwide organization with market proximity and its application support service. The range comprises more than 225,000 products from miniature bearings only a few millimeters wide, e.g. for dental drills, to large-size bearings with an outside diameter of several meters, e.g. for wind turbines.