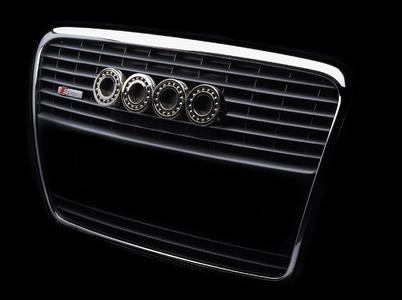 Ball bearings of Schaeffler's brand FAG (formerly Kugelfischer) also put the automotive milestones from Audi and the brands belonging to Auto Union into motion. What began with classic rolling bearings, has developed today into an almost unlimited number of innovations that have been realized jointly. The cooperation has always been characterized - as is usually the case in successful partnerships - by innovativeness and a cooperative spirit. Close proximity created even closer contact. Audi's 100th anniversary also coincides with the 50th anniversary of the Schaeffler location in Ingolstadt. And the Ingolstadt location plays an extremely innovative role in the history of Schaeffler: The first hydraulic valve lash adjustment elements were developed here. A Schaeffler innovation which has become the standard for modern engine design worldwide since the mid seventies.

An important chapter in 100 years of "Vorsprung durch Technik" has been the development of the direct-injection diesel engine. It has celebrated as "TDI" an unprecedented run of success worldwide for two decades. With the invention of the overrunning alternator pulley, Schaeffler succeeded in achieving a decisive breakthrough in the development of high-speed, high-performance and high-torque direct-injection diesel engines. This component in the belt drive enables comfortable operation of modern diesel engines. This inconspicuous part patented by Schaeffler can be found today in all modern diesel engines.

Dual mass flywheels from LuK ensure suitable running comfort. They isolate the transmission and the vehicle from engine vibration and are an additional and necessary detail in the development of a comfortable diesel vehicle.

"With a special rolling bearing", remembers Dr. Peter Gutzmer, Executive Vice President of Schaeffler Technical Product Development, "Schaeffler also supported Audi's move into the upper-class automobile market". The specialists from Herzogenaurach developed a new polygon bearing for the Audi V8 which appeared in 1989. In-house it is known as the "anti-boom bearing" and eliminates noise in the quattro four-wheel drive train. This means that in this area the new Audi V8 is even better equipped to meet the increased comfort requirements in the upper-class automobile market. The polygon lager, thus, represents an unlimited number of rolling bearings which till this day ensure that the rotating components of each and every Audi move efficiently and wear-free. Their area of application extends to motor racing where they have contributed a part in Audi Sports' remarkable record of success which is crowned by numerous victories at Le Mans.

The hydraulic tappets for the five-valve engines that are delivered preassembled to the engine assembly line by Schaeffler are worthy of mention due to their extremely compact size and are also among Schaeffler's innovations for Audi. The variable cam timer used in the current Audi and Volkswagen EA888 engine series represents a further technical highlight. Schaeffler supplies what is recognized as the fastest-reacting system available on the market for this modern four-cylinder engine generation. It makes a significant and measurable contribution to reducing fuel consumption and CO2 emissions like the bearings, roller type finger followers, tappets, hydraulic chain tensioners and a number of further precision parts from Schaeffler.

"We are proud of being able to make a continuous contribution to "Vorsprung durch Technik" and look forward to further, innovative solutions which will make automobiles even more economical, safer and have lower emissions", says Dr. Elmar Degenhart, President of Schaeffler Group Automotive, in view of this anniversary.

The Schaeffler Group and its 66,000 employees at more than 180 locations worldwide generates group sales of around 8.9 billion Euros (FY 2008) and ranks amongst the leading rolling bearing manufacturers and suppliers to the automotive industry worldwide. The INA, FAG, and LuK brands all belong to the Schaeffler Group.