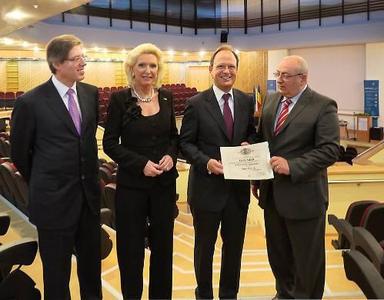 (PresseBox) ( BRASOV, Romania, 11-05-13 )
Dr. Peter Pleus, Member of the Board of Management of Schaeffler GmbH and President of Schaeffler Group Automotive has received an honorary professorship from the University of Brasov.

Prof. Dr. Ion Visa, rector of the university, presented the certificate of appointment and congratulated Dr. Pleus: "In recognition of your contribution to the development of the automotive industry, your successful career, and the Schaeffler Group's enduring interest in working with the University of Brasov, I am very pleased that you are now professor and member of our scientific family".

He praised the collaboration project set up in 2005 between the university and the Schaeffler Group and its Brasov plant, which is developing year by year. The project has facilitated a large number of joint research projects as well as degree theses and doctoral theses, the setup of a research laboratory in 2006 and has seen guest lectures being held. Schaeffler has been awarding so-called "Scholarships in Excellence" to the ten best university students since 2008.

Partner Maria-Elisabeth Schaeffler, who has been honorary member of the senate of the independent Transylvania University of Brasov since 2005, gave the laudatory speech for Dr. Peter Pleus, who earned his doctorate in mechanical engineering. "In his field of expertise, Professor Dr. Pleus has made a considerable contribution to maintaining and developing the close links between the Schaeffler Group and the Transylvania University of Brasov. With a good eye for recognizing the sustainability of a location and in his role as a mentor, he has used his knowledge of technical developments in internal combustion engines, the global developments in the automotive industry and in global mobility to advocate the strengthening of the relationship with the Transylvania University of Brasov and the further development of Schaeffler Romania. In her speech, Mrs. Schaeffler also emphasized: "As a highly-innovative technology company that permanently seeks improvement in all areas, the close collaboration with the university as a bridge between research and practical applications is particularly important for Schaeffler".

During the award ceremony, Prof. Dr. Pleus gave a talk about the challenges Schaeffler faces in the future as a global supplier to the automotive industry and opened this semester's automobile seminar at the Romanian university's faculty of mechanical engineering.

Prof. Dr. Pleus gave the students some advice: "I have seen a great deal of innovative technologies and changes in prevailing opinions during the last 30 years in the automotive industry, but I was always able to fall back on my solid education and knowledge. And that's what I would like to wish the next generation of researchers and engineers - may you be able to develop and, if necessary, fall back on a sound education in the fields of mathematics, technical mechanics, thermodynamics and their equivalents in electrical engineering. If you have sound basic knowledge of a subject that withstands the test of time, you'll have a clear conscience if you decide to develop this knowledge according to your needs and preferences."

This is set to commence with a seminar on engine technology with a series of presentations supported by employees at the Brasov plant and the automotive sector at headquarters. Two employees from the calculation department in Herzogenaurach are set to receive doctorates in Schaeffler-specific topics from Brasov. In addition, a laboratory for investigating friction, design and simulation of components and systems for vehicles is to be set up at the university.

Schaeffler started manufacturing in Brasov in November 2002 in a rented factory with around 100 employees with the intention of setting up a new plant. In October 2004, 652 employees began producing linear guidance systems, connecting rods, brass cages and tripod rollers in the newly-constructed plant, which was later extended. In 2007, Schaeffler was employing 2,500 employees at the location. A new, modern forge was put into operation at the plant in the spring of 2009. Today, more than 3,200 people are employed at Schaeffler Romania, of which nearly 600 employees are academics.

The Schaeffler Group with its product brands INA, LuK and FAG is a leading provider of rolling bearings and linear products as well as a renowned supplier to the automotive industry of high-precision products and systems for engines, transmissions and chassis applications. The group of companies stands for global customer proximity, innovative ability and the highest possible level of quality. Sales of €9.5 billion were generated at over 180 locations in more than 50 countries in 2010. With more than 67,500 employees worldwide, the Schaeffler Group is one of the largest German and European industrial companies in family ownership.

Our main customer is the automotive industry with around 60 percent of our sales. Schaeffler is a renowned development partner to the industry with system expertise for the entire drive train. Precision products for engines, transmissions and chassis applications ensure reduced energy consumption and lower emissions as well as increased driving comfort and safety.