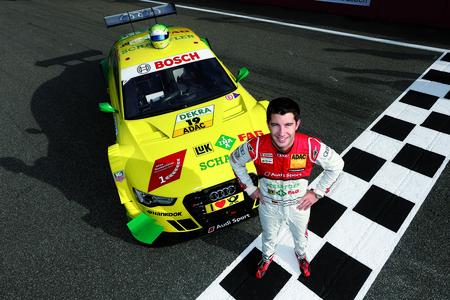 (PresseBox) ( Herzogenaurach, 13-12-13 )
Two titles in three years: The green-yellow Schaeffler colors, in a manner of speaking, are a guarantee for success in the DTM. This is to continue, as Audi and Schaeffler have extended their partnership in the DTM by another three years. Champion Mike Rockenfeller will therefore be tackling the 'title defense' mission in his usual, striking car colors - albeit with his Schaeffler Audi RS 5 bearing the prestigious car number '1' marking for the first time.

"Schaeffler, Audi, Phoenix Racing and Mike Rockenfeller - this combination is simply a perfect fit. That's why we're delighted that this success story will continue," says Prof. Dr. Peter Gutzmer. Schaeffler's Board Member for Development emphasizes in this context that the commitment not only has a powerful external impact but evokes a positive response within the company as well: "Motorsports emotionalize and unite particularly in the case of success. Today, many of our more than 77,000 employees are big Audi, Rockenfeller and DTM fans. But motorsports have traditionally had a special significance at Schaeffler and the Schaeffler brands - as befits an innovation-driven technology corporation."

'Rocky,' too, directly feels this enthusiasm whenever he takes time out between the races to visit one of the company's locations. "At Schaeffler, a lot of emotions are associated with motorsports. Representing a global corporation that is as enthusiastic as this one on the race track and being successful on top of it - that makes me happy and proud," says Mike Rockenfeller.

Two years before 'Rocky,' Audi driver Martin Tomczyk had clinched his first DTM title in the 2011 season sporting the colors of the globally renowned automotive supplier. The two 'green-yellow' triumphs achieved by Tomczyk and Rockenfeller have so far been highlights of a commitment which Schaeffler and its INA, FAG and LuK product brands began in the international touring car racing series in 1986. Race cars of the Alpina, Audi, BMW, Ford, Mercedes-Benz, Opel and Rover brands have been bearing logos from the Schaeffler brand family, primarily the LuK logo, ever since. At the same time, various drivers, including the DTM Champions Kurt Thiim, Mattias Ekström, Timo Scheider, Martin Tomczyk and Mike Rockenfeller, became brand ambassadors.

Schaeffler looks back on a successful motorsports history in other series and vehicle classes as well. With BMW the company won the World Touring Car Championship, with Renault the European Truck Championship, and with Mitsubishi and Jutta Kleinschmidt the Dakar Rally. With Volkswagen Schaeffler proved the durability of its products at the 'Dakar' too, as well as in other desert rallies. With the rally driver Armin Schwarz Schaeffler won two German and one European rally title. The Porsche 917 that was victorious at Le Mans was equipped with hydraulic valve train component developments that have subsequently been used in millions of production cars since the nineteen-seventies and laid the foundation for the current know-how and portfolio of the global corporation in the field of engine technology.

Schaeffler with its product brands INA, LuK and FAG is a leading provider of rolling bearing and plain bearing solutions and of linear and direct drive technology, as well as a renowned supplier to the automotive industry of high-precision products and systems for engines, transmissions, and chassis applications. The globally active group of companies generated sales of approximately 11.1 billion euros in 2012. With over 76,000 employees worldwide, Schaeffler is one of the largest German and European industrial companies in family ownership. Schaeffler has a worldwide network of manufacturing locations, research and development facilities, sales companies, engineering offices, and training centers.