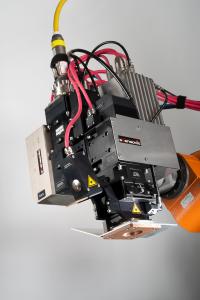 (PresseBox) ( Berlin, 19-06-24 )
Scansonic is showcasing its next generation of RLH-A laser hardening optics at the LASER World of PHOTONICS 2019. Featuring innovative control technology and variable spot geometry and size, the new optics are designed for high-end applications like those commonly used in the automotive industry.

Lasers for hardening steel surfaces can be used for high-precision hardening of the smallest structures. The new Scansonic RLH-A Rel. III laser optics offer increased precision compared to the earlier version. The company's laser experts will be showcasing the innovation at this year's LASER World of PHOTONICS (Hall A3, Stand 307).

Scansonic RLH-A laser processing optics were originally developed in cooperation with the automotive industry. Typical applications include laser hardening of camshafts or other rotating engine parts. Precisely defined heat treatment of highly-stressed surfaces is the key to lightweight construction. The reduction of weight and moving mass is an important factor in lowering fuel consumption and CO2 emissions. A major advantage of laser hardening is that the parts can be specifically heated. This minimizes distortion, which is often inevitable during flame or induction hardening. It also eliminates the need for post-processing. Users benefit from significantly higher efficiency and lower costs.

Continuous advancements in engine design technology lead to increasingly complex components with intricate structures in the 0.1-millimeter range. The challenge in hardening these geometries is to regulate the laser power input so that the temperature in the areas to be hardened and the hardening depth remains constant – regardless of the metal thickness. Excessively high temperatures can lead to distortion of the components or melting at the edges.

The surface temperature of the component is measured during the hardening process with a pyrometer integrated into the optics. The control technology in the new RLH-A Rel. III uses two different methods for this. One is to control the scanner, which changes the speed of the laser beam on the surface. On thinner structures that heat up faster, the laser beam moves faster than on thicker pieces. The second control option regulates laser intensity. Using these two methods together ensures a precisely maintained temperature on the surface of the component for perfect hardness results.

Along with the innovative control technology, Scansonic has integrated more features into its new laser optics. Spot geometry and size can now be adjusted separately to make the RLH-A Rel. III even more flexible in operation. In the past, the optics had to be changed for different components. Now, various applications can be used with the same optics. This increases efficiency and lowers user costs.

Like many other Scansonic optics, the entire RLH-A is based on a modular system and can be easily adapted to any specifications. Modern bus systems for communication within the laser optics and connection to a higher-level control ensure added flexibility.

Scansonic will also be presenting a simplified version of the laser optics at the trade show. The RLH-A Basic is available without the components required for laser beam scanning and adjusting spot geometry. This makes the lower-priced laser optics suitable for surface hardening of tools used in metal-forming presses and other applications.

Scansonic supplies systems and solutions for laser welding, laser brazing, and laser hardening along with high-precision sensors for process monitoring. The company's products are primarily used in the automotive industry, rail vehicle construction, and energy technologies. Scansonic MI is the global market leader in laser-based joining systems for body construction. The company is part of the Berlin.Industrial.Group. (B.I.G.). This medium-sized enterprise headquartered in Berlin has roughly 320 employees and generates annual sales of approx. €49.5 million (forecast 2019).