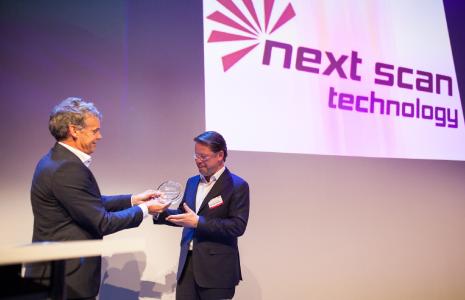 
EPIC is an industry consortium that promotes sustainable development of organizations working in the field of photonics in Europe. Its members encompass the entire value chain from LED lighting, photovoltaic solar energy, photonic integrated circuits, optical components, lasers and sensors to imaging, displays, projectors, optic fiber, and other photonic-related technologies.
The Consortiums annually presents the EPIC Phoenix Award to a company that successfully overcame market and industry challenges through perseverance and true entrepreneurship. The EPIC Phoenix award is seen as a symbol of daily changing realities that entrepreneurs face and the provocative journey this entails. In 2017 the award was granted to the management of the Belgium company Next Scan Technology. Next Scan Technology’s wide range of polygon scan systems enable demanding material processing applications combined with legacy and ultra-short pulsed lasers.

“Ronny De Loor and myself are really proud to receive this EPIC Phoenix award. For us, it is an honour and recognition to be elected by such a remarkable group of European entrepreneurs in photonics. From the very beginning, we believed in the opportunity to address an uncharted area in laser material processing. Since timing determines the necessity of an enabling technology, we are encouraged and convinced that we will grow with our partner SCANLAB addressing the markets of the future and will make further contributions to the EPIC community,” comments Lars Penning, CEO and co-founder of Next Scan Technology, the reception of the award.

About Next Scan Technology (NST):
In 2009, it became clear that economically viable ultra-short-pulsed laser micro-machining would require high average power lasers and very high speed scanning systems. The management of the Dutch/Belgian start up NST realized that well-established technology in demanding industries as high performance laser printers could be adapted to the needs of this new laser material processing market.
At Laser World of Photonics 2011 in Munich, NST was the first to introduce a polygon based scanner system compatible with high power ultra-short-pulsed lasers. From 2013 to 2015, all business activity was transferred to and extended at the new facility in Evergem, Belgium. Since end of 2015 NST is part of the SCANLAB Group.

With over 20,000 systems produced annually, SCANLAB GmbH is the world-leading and independent OEM manufacturer of scan solutions for deflecting and positioning laser beams in three dimensions. Its exceptionally fast and precise high-performance galvanometer scanners, scan heads and scan systems find application in industrial materials processing and the electronics, food and beverage industries, as well as biotech and medical technology.
For over 25 years, SCANLAB has secured its international technology leadership through pioneering developments in electronics, mechanics, optics and software, as well as the highest quality standards.