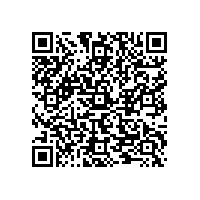 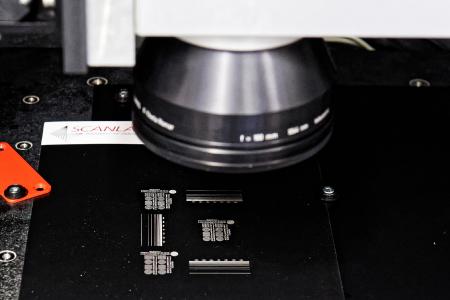 Until now, a scanner's image field has been the key limitation in laser processing – regardless of whether that entails marking, cutting, drilling or even micro-structuring. Wide-area process tasks are executed step-by-step, by processing individual 'tiles'. This approach can involve relatively long process times and stitching errors, i.e. marking displacements at image field boundaries.
To eradicate those deficiencies, the two companies developed the syncAXIS control software, that enables to simultaneously control a laser scanner and a mechanical stage to substantially extend the image field, increase processing throughput while achieving unprecedented levels of accuracy. Here, a demonstration system that consists of: A SCANLAB excelliSCAN 14 scan head with a telecentric 100-mm objective for a 54 x 54 mm2 image field that is controlled by an RTC6 scanner controller; an ACS Motion Control NPMpm NanoPWM dual axis drive module controlling a high accuracy XY stage, and a picosecond laser. The control concept is based on slaving the mechanical stage to the scan system and thus extending the actual field of view of the scanner. Operating the entire system is similar to operating a system that consists only of a scan head and its associated RTC6 controller, utilizing similar set of commands. Therefore, any application that currently can operate a SCANLAB scan head will be able to operate such a combined system with minimal effort.

Boosted productivity thanks to simultaneous motions

Compared to conventional tiled laser processing, significant process advantages can be accrued by intelligently coupling and simultaneously controlling the scan system and an XY stage. In addition to avoidance of stitching errors, accuracy is substantially improved and throughput is increased by up to 40%.

"Numerous test runs by our application experts impressively demonstrate practicality of the new scan concept. In every case, significant process advantages were confirmed when compared to tiling – whether for marking large circular shapes with text, circular shapes in a matrix, diamond patterns or multiple bore holes," reports SCANLAB CTO Norbert Petschik on the successful collaboration. "Even special test patterns for checking the impact of vibrations due to the XY stage's high dynamics revealed no residual effects".

Live demonstration systems of this innovative scan concept will be shown during the tradeshow in Munich both at the booth of BUSCH Microsystems in Hall A2, Booth 220, and at the booth of PI Hall B2, Booth 320.

With over 20,000 systems produced annually, SCANLAB GmbH is the world-leading and independent OEM manufacturer of scan solutions for deflecting and positioning laser beams in three dimensions. Its exceptionally fast and precise high-performance galvanometer scanners, scan heads and scan systems find application in industrial materials processing and the electronics, food and beverage industries, as well as biotech and medical technology.
For over 25 years, SCANLAB has secured its international technology leadership through pioneering developments in electronics, mechanics, optics and software, as well as the highest quality standards

About ACS Motion Control
A global leader of advanced EtherCAT based multi-axis motion controllers, drives and integrated control modules, ACS provides standard and custom products that combine power and precision to deliver flexible, economical, user-friendly motion and machine control solutions. Established in 1985, ACS’ international headquarters is located in Israel and its North American headquarters resides in Bloomington, MN. ACS also has facilities in Germany, South Korea and China, and distributors worldwide that deliver dependable customer service and product support. ACS is an ISO 9001 certified manufacturing facility, demonstrating its continuous commitment to providing customers with reliable state of the art products that are thoroughly tested with the latest available techniques.