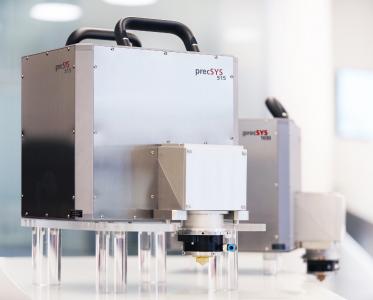 Ongoing technological advances in the consumer electronics and mechanical engineering sectors bring countless changes to how electronic components such as PCBs, control elements and sensors are made. Here, a relatively new laser processing market is the production of probe cards for testing integrated circuits. These probe cards place the highest demands on laser micromachining systems used in micro-structuring applications.

To even better address such demands, SCANLAB is extending its precSYS product line with a subsystem optimized for 515-nm green lasers. That’s exactly half the applied wavelength of a 1030-nm infrared laser, which leads to a much smaller spot size and enhanced lateral precision in processing challenging materials. At the same beam aperture angle, a larger aspect ratio is achievable.

All precSYS scan solutions are galvo-based 5-axis subsystems for integration into laser machines. Thanks to their flexible laser beam positioning capabilities (in the x, y, z, α and β directions), these scan heads offer the highest freedom in developing new process strategies. Circular, elliptical or linear trajectories can be defined for processing in 2D or 3D.

Effective immediately, the entire product line has received a servo control strategy update that enables even higher rotational frequencies and processing speeds in drilling operations. The new DrillControl software version supports both versions of precSYS and allows to use also existing laser jobs. Initial precSYS 515 systems will be orderable as of Q4 2019.

With over 35,000 systems produced annually, SCANLAB GmbH is the world-leading and independent OEM manufacturer of scan solutions for deflecting and positioning laser beams in three dimensions. Its exceptionally fast and precise high-performance galvanometer scanners, scan heads and scan systems find application in industrial materials processing and the electronics, food and beverage industries, as well as biotech and medical technology.
For over 25 years, SCANLAB has secured its international technology leadership through pioneering developments in electronics, mechanics, optics and software, as well as the highest quality standards.