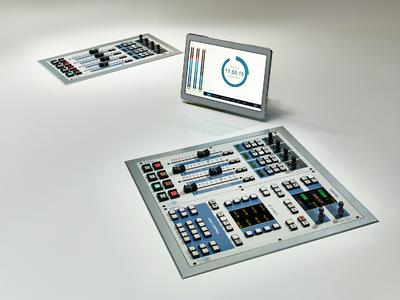 (PresseBox) ( Frankfurt, 14-03-18 )
STAGETEC, the digital mixing console and audio router expert in the SALZBRENNER STAGETEC MEDIAGROUP, is presenting an individual broadcast mixing console, ON AIR flex, with an all-new three-part structure. The thing that makes ON AIR flex unique is that its audio processing, user interface elements and control intelligence are strictly separate components.

By separating the control component the mixer logic becomes freely configurable and available to all. With the help of the specially developed and easy-to-learn configuration software MapCfg, the entire mixing console configuration can be defined!

MapCfg is based on a relatively easy to learn vocabulary that describes the desired mixing functionality and is then compiled. This enables the user to adapt the mixing console to suit the workflow of their radio or TV station. ON AIR flex becomes a truly personalised broadcast mixer.

The three components of ON AIR flex, audio processing, control elements and control intelligence communicate closely with each other. STAGETEC selected the standard IP protocol as the communication medium, streamlining cabling and increasing the freedom of physical location of the individual elements.

The ON AIR flex virtual user interface is another innovation that further emphasises the flexibility of the mixer. It transforms a web browser into a mixer control surface!

Just like ON AIR 24, the ON AIR flex is a modular mixing console system with processing power provided by a NEXUS XCMC board. It can process up to 40 input channels when configured with 8 groups, 8 sums, 8 auxes and 8 mix-minus buses. A further configuration with up to 54 input channels without groups is also possible. The input and output connections are available through the NEXUS network, which can range from a single, locally installed Base Device to a campus-wide audio network.

With the introduction of ON AIR flex, STAGETEC once again demonstrates its role as a visionary in audio mixing console and network technology. This development has tangible benefits for the customer, since by initiating the separation of control intelligence, adding new control logic configurability and an adaptable virtual interface with browser operation we are re-introducing made-to-measure - with unprecedented freedom and exciting prospects for the future.