Intelligent network: DELEC oratis at the National Theatre in Warsaw 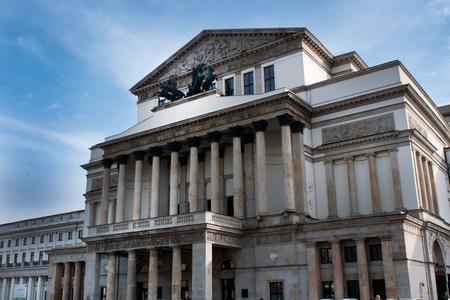 (PresseBox) ( Göllheim, 14-04-04 )
Göllheim, April 2014: Plac Teatralny 3 in Warsaw is the destination for theatregoers in Poland. It is home to the country's National Theatre, with three stages for 80 to 670 spectators in two venues separated by the Magistrale Wierzbowa. A complete refurbishment of the theatre in 2013 saw both venues equipped with a large DELEC oratis system. Installed under tight deadlines during the season break, it is interesting to note that the system not only serves as an intercom, but also is a universal platform for communication, signalling, calls and sound reinforcement, as well as for automated announcements.

Two MF4 oratis matrix frames were installed - one per venue - each with a capacity of up to 256 ports per matrix frame. The matrix frames host the interface cards for 26 oratis subscriber units in the buildings and the three stage manager desks, modules for the digital (AES/EBU) and analogue audio ins/outs, the IF 8PL party line card to integrate analogue belt packs and additional modules for the redundant fibre optic network. Seven oratis GPIO32 universal control units add enormous flexibility, managing the extensive signalling and control tasks. As is usual with oratis, it is based on a fibre-optic network. Konsbud Audio, the Polish MEDIAGROUP distributor, installed around 15 kilometres of cable, integrating existing copper cable installed in the 90s at the theatre's request.

The theatre has three stage manager desks, two of which are mobile. oratis provides a powerful intercom network for the stage manager positions and numerous other locations in the theatre including the entrance, connecting all participants in both buildings. Yet this barely touches on the system's capabilities: Via oratis, from their positions, stage managers can control 20 two-coloured cue lights and even specify the cueing for each performance - all with oratis, of course. This oratis installation also features a public address system in the foyers, camera controls and even automated messages in case of emergencies.

"The National Theatre has worked with several interim solutions since the 80s and 90s and really wanted an integrated stage management and communication system. It had to be flexible and future proof. DELEC oratis supports all standards relevant in the foreseeable future including audio-over-IP, open interfaces, modular upgrades and expansion, and not limited to communication on a digital platform as this installation proves. The theatre was right to choose this pioneering solution and so far it has met all expectations," said Piotr Jankiewicz, Project Manager at Konsbud Audio, MEDIAGROUP's partner in Warsaw.