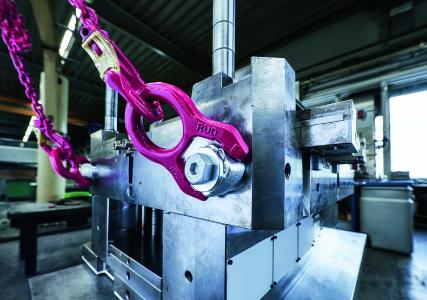 (PresseBox) ( Aalen, 19-04-03 )
German based global leader for sling and lashing technology RUD presents a hoist ring with an innovative spring mechanism for more safety. The mechanics of the new RUD ACP-TURNADO ensure that the anchor point always immediately turns in the load direction when raising the load. This constructively prevents a dangerous stop of the bracket and the associated high shearing forces. This also rules out the feared dropping of the load as a result of the sudden turning of the bracket. In addition, through its optimised design and its special screw technology, according to RUD the anchor point facilitates higher working load limits of up to 30 %. An RFID transponder is installed as standard to simplify the inspection of operating equipment.

"The RUD ACP-TURNADO eliminates the deficits of normal central anchor points. It makes the work for users considerably easier and makes it significantly safer," says Hermann Kolb, Head of Department of the Sling & Lashing Business Unit at RUD in Aalen.

Above all, the RUD ACP-TURNADO removes the two known weaknesses of normal central anchor points. If its bracket remains in the "Worst-Case-Position" during lifting, large shear forces and bending moments affect it. This can result in damage or even breakage. If the bracket then suddenly turns out of this position, the load mostly drops suddenly. Damage to the load, anchoring and even to crane components are often the result.

It is impossible for the bracket to stop

Thanks to the specific design of the RUD ACP-TURNADO, it is impossible for the bracket to stop. The heart of these mechanics is a spring, which prevents a fatal 90°-position of the bracket and during lifting moves it without fail in the direction of the optimal force transfer.

As this "Worst-Case-Position" is therefore avoided, a sudden dropping of the load is no longer possible. "Looked at like this, the RUD ACPTURNADO therefore thinks. We therefore are speaking with conviction of "the world's first intelligent anchor point," explains Hermann Kolb.

No tilting of the hook in the bracket

In addition: The designs of other central anchor points favour so-called kinks of the hook in the bracket and thus make it more difficult to achieve a secure sit and an optimal force transfer. Thanks to the round bracket design of the RUD ACP-TURNADO, a reliable sit of the hook is guaranteed. Component damage is also prevented by this.

Up to 30 % higher load capacities than comparable sizes

As the screw at the critical transfer from the anchor point to the load is exposed to extreme loads, the developers from RUD have also optimised this considerably. Firstly, the so-called RUD ICE-BOLT screw comprises a RUD steel specially developed for this use, which combines maximum strength with very high toughness. As a result, it withstands the particularly high statically and dynamically bending loads. Additionally, the anchor point is reinforced at the locations most exposed to loads and is optimised both in terms of the height and the shape. "Through the interaction of these factors, we have increased the load capacities of the screw by up to 30 % compared to comparable sizes," emphasises Kolb.

Apart from safety-relevant aspects, the RUD ACP-TURNADO also offers benefits when handling. As a result of the abrasion lenses at the critical points of the load transfer, it is easy to determine whether the anchor point has already reached discard criteria. Furthermore, the combi-head screw is undetachable but changeable: a useful product feature for everyday use because it makes handling noticeably easier.

The new RUD ACP-TURNADO is currently available with screw diameters M12/½", M16/5/8", M20/¾", M24/1" and M30/1 ¼". "Our new anchor point will be welcomed everywhere where low designs, safety, high load capacities and the best handling have the highest priority," predicts Hermann Kolb. Apart from Mould & Die, these mainly include engineering, tool construction, the automotive industry, the plastics industry and companies from the energy sector.

As extensive testing of lifting tackle and legally secure documentation are required in an increasing number of countries, RUD installs RFID transponders as standard – also in the new RUD ACP-TURNADO.

This allows the anchor point to be identified clearly by a factory-set ID number and to transfer this by laptop or mobile device to corresponding software tools. This process reduces inspection costs and times and also leads to considerably more process reliability because faults can be avoided. Users of lifting tackle can manage test data and documents either in their own databases or they can use the cloud-based resource management tool Aye-D.Net. This is available from the RUD Partner Syfit.

RUD Ketten Rieger & Dietz GmbH u. Co. KG, founded in 1875 by Carl Rieger and Friedrich Dietz in the Swabian city of Aalen, Germany, achieves with over 1700 employees in more than 120 countries an annual turnover of 200 million Euro. At locations, among others in Germany, Australia, Brazil, China, India, Romania and the USA, the family business manufactures, apart from sling technology, lashing technology and Non-skid chains also hoist chains and conveyor systems. With the ERLAU brand, the German traditional company also manufactures tyre protection chains and property furnishings for indoor and outdoor areas.