Urban 3D-Puzzle in the Superlative – 7.000 Pieces for Uppsala 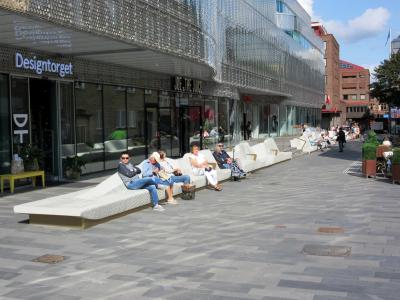 (PresseBox) ( Augustusburg-Hennersdorf, 19-01-15 )
About 70 kilometres north of the Swedish capital, Stockholm, lies Uppsala, the fourth largest city in the country. This city is rich in tradition and is especially popular with students. In the heart of the city, a pedestrian zone and the central square "Forumtorget" invite you to stroll and linger. Since the spring of 2018, extraordinary seating furniture enriches the cityscape. The solid surface material specialist Rosskopf + Partner used the bold designs of the Swedish company White Arkitekter to create the masterful sofa.

As early as 2011, the city of Uppsala awarded the tender for the renovation and redesign of the central meeting place. The contract went to a concept that consisted not only of modern floor slabs and a circular plateau for the central square, but also of a unique 65-meter-long bench for the narrow street adjacent to the square. With its organic curved lines, the bench creates a visual axis between the square and Dragarbrunnsgatan. It also playfully connects two walkway levels and offers plenty of space on both sides for sitting, lying down and relaxing for a spell.

The bench is extraordinary because of its dimension. More than 7,000 slats of glass and quartz material combine to form an impressive complete work of art. No part is like another and each one is unique. Transparent and opaque elements were installed in alternating order. These differ only minimally in their geometry so that several lamellae produce the slowly changing lines. This constellation creates different heights, lengths and angles. From time to time, a shiny metallic slat protrudes from the organic form to serve as an armrest.

Approximately 1,100 square metres of Technistone quartz material in the special colour light grey were used to create the bench. White’s internal development network for computational design, Dsearch, was involved in the planning to achieve the systematic inequality of the parts and was responsible for the coordination of the digital design development. The parts were then cut using water-jet machining to the precise specifications of Rosskopf + Partner.

Because of its bright surface, the bench is a brilliant eye-catcher by day; at night, it becomes a changeable light installation. The milky glass louvers can be backlit in a variety of colours and changed over the entire length of the furniture in both colour and intensity. This not only creates a pleasant atmosphere, but also emanates a sense of security for the passers-by.

The acceptance took place in October 2018. In retrospect, project manager Sandro Gieck reported: "It was truly an extraordinary project. Between July 2017 and February 2018, we produced and assembled 7,000 very different pieces: it was like a gigantic puzzle. Especially putting the pieces in order and fitting them exactly together was a real challenge. Assembling the bench in the Swedish winter proved to be a chilling task. I was thrilled all the more when we returned in the summer and could experience our giant sofa as seen in everyday life. We are proud that we were able to contribute to an object that actually connects people and has a lasting impact on the cityscape.”

Rosskopf + Partner is a point of contact and implementation partner for innovative surface materials. Architects, planners, builders, processors and the kitchen and bathroom trade all benefit from decades of experience and competence of the company – from consulting to engineering, manufacturing to assembly, and the distribution of materials. With over 210 employees at two production sites in Saxony and Thuringia, Rosskopf + Partner transforms ideas into innovate shapes: Engineers and processing and assembly experts develop tailor-made surface solutions from solid surface materials, quartz material, porcelain ceramics and natural stone. Whether in individual or series production, industrial or handcrafted products – the goal is always transforming visions into perfect forms and shapes.