Rittal IT practical days in Stuttgart and Munich 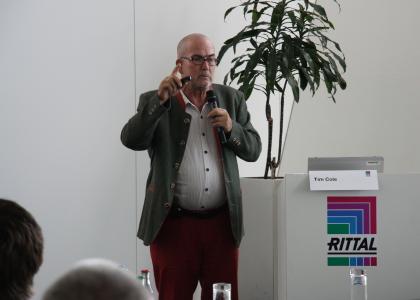 (PresseBox) ( Herborn, 17-08-01 )
Leading studies suggest that global data volumes will increase tenfold to 163 zettabytes (ZB) by 2025. Associated infrastructure demands and the need for data center services will grow in parallel to this in the coming years. IT and data center managers discussed these issues and the efficiency of the data centers of the future at Rittal’s industry meetings in Stuttgart and Munich. In addition to much food for thought about the digital transformation, they went away with some useful technology trends and tips from blogger Tim Cole.

“Are you ready for the digital transformation?” asked IT publicist Tim Cole, challenging his audience at Rittal’s IT practical days – and with good reason. According to the latest IDC Benchmark Assessment, a fifth of German businesses are still adopting a wait-and-see approach to digitalization. Only 16 percent of companies have become market leaders by acting as digital transformers.

“Data is the petroleum of the 21st century”

In exploring the three megatrends of the 21st century – digitalization, networking and mobility – Cole quoted futurist and blogger Gird Leonhard, who calls digital data the “petroleum of the 21st century”. One difficulty, he maintained, was that numerous processes and pieces of information are already digitalized and data volumes are growing rapidly, but this data can often not be located. He put this down to inadequate networking and compared the situation to an archipelago of digital islands. Achieving a breakthrough here was, he said, one of the biggest challenges facing companies in the next 10-15 years. Cole recommended that companies view their own data as part of their assets and use it to derive information for the future. Companies that succeed in creating links between apparently unrelated items of data can, he contended, use predictive analysis methods to cut costs by forecasting future events. “An item such as a cooling unit can then generate a system message indicating that it needs servicing before it breaks down and causes production downtime,” he explained.

Data center technology in transition – from standards to the cloud

The workshops also focused on technical progress, with industry experts addressing topics such as “The future-proof data center – planning and operating challenges” and “Modularity and efficiency of edge and container data centers”. One key question was how the revolution in data center technology is impacting on company practice.

“If we look at German data centers, we’re not yet sufficiently prepared for smart factories, smart cities and the Internet of Things,” warned Dr Sebastian Ritz, founder and CEO of iNNOVO Cloud GmbH. In Germany, he revealed, between sixty and seventy percent of IT is hosted in server rooms rather than secure data centers (private data centers or colocation) or private/public clouds. Given the low levels of in-house capacity utilization – often well below 50 percent – scalability and commercial benefits are two further arguments for giving preference to hybrid cloud models, he insisted.

According to Dr Ritz, two things are particularly important. “Firstly, SMBs must be able to master the digital revolution commercially if they are offered data center resources they can hire. And secondly, new technologies like the private or public cloud need trust,” he stressed. This trust comes from reference projects and personal contact, he said, adding that it is important to SMBs that they can look their business partner in the eye when dealing with strategic and business-critical IT. More than anything else, he argued, companies trust people who can guarantee security and smooth running.

“We focused on dialogue between customers and experts, because digitalisation continues to cause uncertainty and throw up numerous questions. These questions were discussed at the workshops and answered using clear examples, including the issue of trust for new technologies like the cloud,” said Christian Ludwig, Vice President Sales IT at Rittal, who hosted the company’s IT practical days.

Rittal, headquartered in Herborn, Germany, is a leading global provider of solutions for industrial enclosures, power distribution, climate control and IT infrastructure, as well as software and services. System solutions from Rittal can be found in more than 90 percent of all global branches of industry, including mechanical and plant engineering, food and beverages, IT and telecommunications.

The wide range of products from the global market leader includes configurable enclosures, whose data is available throughout the entire production process. Intelligent Rittal cooling solutions with up to 75 percent lower energy and CO2 consumption can communicate with the production environment and enable predictive maintenance and service concepts. Innovative IT solutions ranging from IT racks and modular data centers through to edge and hyperscale computing solutions all form part of the portfolio.

Founded in Herborn in 1961 and still run by its owner, Rittal is the largest company in the Friedhelm Loh Group. The Friedhelm Loh Group operates worldwide with 18 production sites and 80 international subsidiaries. The entire group employs more than 11,300 people and generated revenues of around €2.2 billion in 2016. In 2017, it was named one of Germany's leading employers by the Top Employers Institute, for the ninth year running. Within the scope of a Germany-wide survey, Focus Money magazine and the Deutschland Test organization identified the Friedhelm Loh Group as one of the nation's best providers of vocational training for the second time in 2017.

More transparency and control over power consumption in IT racks

Rittal at Hannover Messe Digital Days 2020: Solutions for the industrial transformation - from IT rack to edge computing