RockNet at Bread & Butter with Lleyendecker 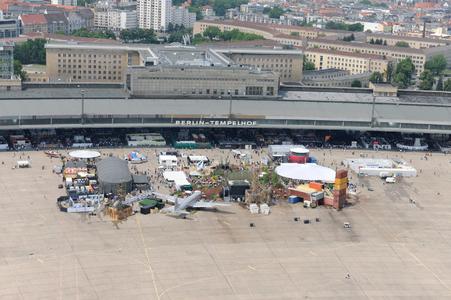 (PresseBox) ( Berlin/Wuppertal, 09-08-31 )
The Wuppertal based rental company Lleyendecker expanded its stock of equipment with Riedel RockNet. Riedel, one of the leading manufacturers of intercom, audio network and fiber technology, delivered a comprehensive RockNet system. Lleyendecker has already used the equipment at the fashion exhibition Bread & Butter in Berlin, as well as at various concerts and events such as the T-Mobile Street Gigs.

The first use of the new RockNet equipment was at the Bread & Butter fashion exhibition held at the compound of the former Tempelhof airport in Berlin. The task was to integrate three DJs at different locations, two mixing consoles, as well as speakers in two hangars and on the airfield. It was crucial that the output of any DJ could be routed to any location on the exhibition grounds.

Approximately 2 miles (3 kilometers) of CAT-7 and 4 x 1.5 miles (2.5 kilometers) of fiber links bridged the distance between the speakers, the consoles and the DJs. Two additional repeaters were utilized for the long distance link. The repeaters expanded the range of copper links by 500 feet (150 meters). RockNet line in and line out modules provided connections for the amp towns, the DJs and additional speakers. RockNet's flexible routing allowed the DJs to patch to any speaker location. Two RN.341.MY expansion cards integrated two digital Yamaha 01V mixing consoles into the audio network. Another great advantage of RockNet is the consistently high audio quality, even over long distances like the ones at the Bread & Butter show. A total of eleven Yamaha mixing console were used in this setup.

"For the installation at Bread & Butter we wanted to have the possibility of routing single channels within the RockNet network. Riedel provided us with a beta version of firmware that included this feature. It worked flawlessly just like any regular firmware for RockNet," said Oliver Tschotow from Lleyendecker.

The firmware version 1.4 is now available as a free update for all RockNet users. It offers single channel routing. In previous versions routing was only possible in "quads" - groups of four channels. Lleyendecker utilized 98 channels for the PA system.

"We are really happy with our decision to choose Riedel. The flexibility and the ease of use are major advantages, especially with big installations. In the past, installations demanded a lot of cabling; RockNet changed this. RockNet's network structure is a major advantage, especially for events like Bread & Butter, where RockNet modules are set up in groups of two or three and spread out over a large area. Moreover, the pristine digital audio quality is another point where RockNet truly shines," said Tschotow.

Lleyendecker is a Wuppertal based rental company specializing in lighting and sound for events, exhibitions and concerts.

Riedel Communications - the largest supplier of communications equipment to the 2008 Olympic Summer Games in Beijing - designs, manufactures and distributes the most sophisticated intercom and radio technology for customers worldwide in the broadcast, pro-audio, event, sports and theatre industries. The products reflect today's leading-edge technologies that expand conventional concepts into tomorrow's applications. The Riedel group of companies also includes a European based large rental operation that provides radio, intercom services, event accreditation & ticketing systems as well as fiber-based and wireless audio & video transmission systems. The Company was founded in 1987 and today employs over 200 people located within 8 locations in Europe, Australia, Asia and North America.