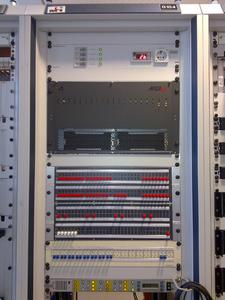 One of the main requirements of the installation at the MDR studios in Dresden was to establish a comms infrastructure that integrates all of the MDR TV and radio studios into one system allowing calls between both areas.

A total of two Riedel Artist digital matrix intercom mainframes are used at MDR. While one Artist 128 is used at the TV studios, the radio broadcast studios use an Artist 64 for their intercom needs. Both mainframes are connected via fiber forming a large nonblocking matrix. In this way up to 100 matrix mainframes can be connected to form a single Artist network with a total size of up to 1,024x1,024 nonblocking ports. Due to Artist's decentralized network approach the system can be expanded easily with additional control panels, ports or mainframes.

MCS GmbH Sachsen decided to install a mixture of Riedel Artist 1000 and Artist 2000 series control panels at the MDR studios. Both panel types feature broadcast quality audio via AES connections. Furthermore, the secondary audio channel of the Artist 1000 series allows for commentator audio in addition to the intercom application.

"Riedel has done a great job with their Artist installation. The integration of both studio complexes enhances our workflow significantly. Furthermore, the possibility of easily expanding the installation with matrices gives us the flexibility and security we need for long term planning," said Manfred Otto, engineer at MCS GmbH Sachsen in Dresden.

The Artist installation in the radio studios includes a total of 14 Artist control panels combining both Artist 1000 and Artist 2000 series panels. In addition, four Danner control panel modules complete the setup. The Danner modules can be integrated into desks and consoles and feature the same functionality as regular Artist control panels. A Riedel RIF interface provides additional GPIO ports.

Both intercom systems are combined in the master control room allowing seamless calls between the installations.

Riedel Communications - the largest supplier of communications equipment to the 2008 Olympic Summer Games in Beijing - designs, manufactures and distributes the most sophisticated intercom, fiber, audio and radio technology for customers worldwide in the broadcast, proaudio, event, sports, theatre and security industries. The products reflect today's leadingedge technologies that expand conventional concepts into tomorrow's applications. The Riedel group of companies also includes a European based large rental operation that provides radio and intercom services, event IT solutions as well as fiberbased and wireless audio & video transmission systems. The Company was founded in 1987 and today employs over 200 people located within 8 locations in Europe, Australia, Asia and North America.