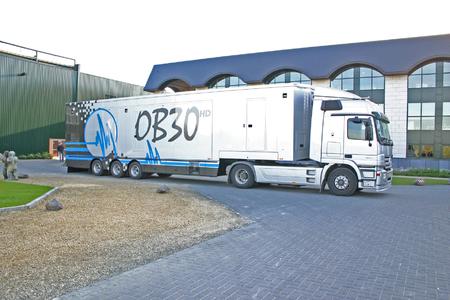 (PresseBox) ( Lint, Belgium, 10-06-02 )
Belgium based and international TV broadcast and OB truck provider Alfacam equipped five HD OB trucks that will be used for the FIFA Football World Cup 2010 with a comprehensive MediorNet installation from Riedel Communications. MediorNet is a fiber based realtime signal distribution and routing solution for HD/SD video, audio, intercom and data that also includes software based processing features.

Alfacam is in charge of the world feed production at the venues in Johannesburg, Pretoria, Durban and Port Elizabeth. Besides this production, Alfacam is responsible for the unilateral signal for ARD/ZDF, the German public broadcasting. Therefore, Alfacam will send 8 OB trucks, 80 cameras and about 35 top technicians to South Africa. Alfacam was assigned for about 45 per cent of the "host feeds" of the WC 2010 and will deploy in total 170 cameras and 155 technicians.

The MediorNet mainframes link Alfacam's trucks with the technical operation centers (TOC) in the stadiums, delivering 16 HD-SDI signals including the world feed to the trucks and four back from the OB van to the TOC. MediorNet's integrated CWDM multiplexing provides maximum fiber efficiency and allows transporting all HD signals bidirectional via one single mode dual fiber link. MediorNet's integrated Embedding/De-Embedding feature deembeds the audio and delivers the signals via MADI to the trucks' LAWO audio consoles. As the video and audio streams come from various asynchronous sources Alfacam also makes use of MediorNet's Framestore feature, which synchronizes the video signals to the truck's internal clock, while the audio signals are synchronized via MediorNet's Sample Rate Converter (SRC). After editing, the final HD video and audio stream is sent back to the TOC, from where it is forwarded to the IBC for the world broadcast of the event.

"With our task, to process the stadium's cameras, the world feed of the games and to provide the feed for the German broadcast of the event, it is important that we can absolutely rely on the technology we use. MediorNet gives us all we need for this exciting broadcast operation while saving a lot of equipment such as deembedders, framestores and such, which we would have needed with other solution", said Rene Alles, Project Manager at Alfacam Deutschland.

Riedel Communications - the largest supplier of communications equipment to the 2010 Olympic Winter Games in Vancouver - designs, manufactures and distributes the most sophisticated intercom, fiber, audio and radio technology for customers worldwide in the broadcast, proaudio, event, sports, theatre and security industries. The products reflect today's leadingedge technologies that expand conventional concepts into tomorrow's applications. The Riedel group of companies also includes a European based large rental operation that provides radio and intercom services, event IT solutions as well as fiberbased and wireless audio & video transmission systems. The Company was founded in 1987 and today employs over 250 people located within 9 locations in Europe, Australia, Asia and North America.

Mit der Verzeichnisdienst-App in macOS kann das Apple-Betriebssystem auch an Active Directory angebunden werden. Auch eine Integration von macOS in Arbeitsgruppen ist problemlos möglich. Wir zeigen, worauf es ankommt. read more
The publisher indicated in each case is solely responsible for the press releases above, the event or job offer displayed, and the image and sound material used (see company info when clicking on image/message title or company info right column). As a rule, the publisher is also the author of the press releases and the attached image, sound and information material.
The use of information published here for personal information and editorial processing is generally free of charge. Please clarify any copyright issues with the stated publisher before further use. In the event of publication, please send a specimen copy to service@pressebox.de.