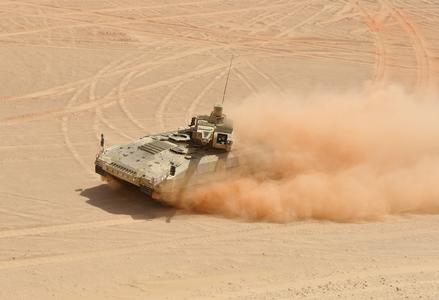 (PresseBox) ( Paris, 14-06-12 )
Now being built in series for the German Army, the new Puma armoured infantry fighting vehicle is on show at this year's Eurosatory for the first time (Stand C220).

During recent heat (UAE 2013), cold (Norway 2012) and live-fire trials conducted in cooperation with experts from the Federal Office of Bundeswehr Equipment (BAAINBw) and the German Army, the Puma performed very well under all climatic conditions.

Germany's new armoured infantry fighting vehicle combines superb tactical and strategic mobility with maximum crew protection and massive firepower, placing the Puma literally in a class of its own.

In terms of technology, the Puma AIFV is on the cutting edge in every respect, with an extremely effective modular protection concept, a remote-control, stabilized turret armed with an ABM-capable 30mm automatic cannon, decoupled running gear with hydro-pneumatic shock absorber elements, and last but not least its compact, newly developed MTU main engine (800 kW).

Another vital aspect of the forward-looking Puma concept is its network-enabled warfare capability, including battle management and future soldier systems and digital communications equipment. This too will make the new AIFV a key element in modern operational scenarios.

To help soldiers sharpen their skills, each vehicle can be quickly transferred to training mode, enabling it to serve as an autonomous training platform. Moreover, special networking technology makes it possible to connect up to four vehicles in a training formation. In addition, advanced simulators (e.g. driving simulators) and computer-supported training aids are available for training the entire crew.

The Puma's unrivalled growth potential - closely linked to systematic use of open interfaces - will enable the system to evolve to meet future challenges, keeping it combat-ready for decades to come.

The Puma AIFV is the product of a globally unique partnership of Europe's top two makers of land systems, Krauss-Maffei Wegmann and Rheinmetall. Founded specifically to manage the German Puma procurement project on the contractor side, PSM Projekt System & Management GmbH is a 50:50 joint venture owned by the two groups.