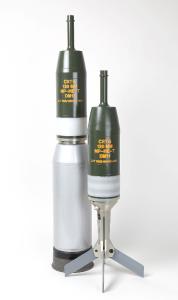 (PresseBox) ( Düsseldorf, 17-07-18 )
Rheinmetall has entered a framework agreement to supply the German Bundeswehr with ammunition. In an initial move, the Federal Office for Bundeswehr Equipment, Information Technology and In-Service Support (BAAINBw) in Koblenz has placed an order for 5,000 rounds of DM11 service ammunition. The gross value of this first individual order comes to around €45 million (€38 million without VAT). Delivery will take place in 2017 and 2018.

Already in service with the US armed forces, the versatile 120mm DM11 cartridge has proven highly effective in combat operations. Rheinmetall is renowned worldwide for its 120mm smoothbore systems, which for example serve as the main armament of leading tanks like the Leopard 2 and M1A1 Abrams. These include its L44 and L55 tank guns as well as kinetic energy, multipurpose and practice ammunition. Furthermore, Rheinmetall is a globally acknowledged specialist for upgrade programmes for main battle tanks. In the medium-calibre domain, too, Rheinmetall is a global technology leader, offering a wide array of products.

Rheinmetall’s time-delay multipurpose 120mm x 570 HE Temp. DM11 round is programmed after loading. This means that the fuse programming can be altered at any time. Importantly, the system modification necessary for this (the programming kit) can be readily retrofitted into any main battle tank with a 120mm smoothbore gun and a modern fire control unit.
The ammunition can be used in three different fuse modes, making it the world’s most advanced and effective HE round:
Officially referring to it as the “Multi Purpose (MP) DM11”, the US Marine Corps already uses the DM11, primarily for engaging unarmoured and lightly armoured targets in asymmetric conflicts. The first series production lot was delivered to the Bundeswehr in 2014. In the meantime, other Leopard 2 user nations have also taken delivery of initial shipments of the service version of the DM11.