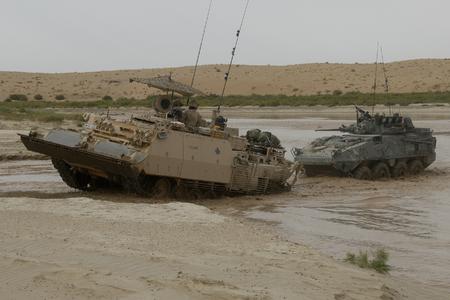 (PresseBox) ( Düsseldorf, 11-12-20 )
The Rheinmetall Group of Düsseldorf, Germany, is to supply the Canadian armed forces with the state-of-the-art Büffel/Buffalo armoured recovery vehicle. Rheinmetall secured this important contract in the face of stiff competition, underscoring the Group's leading role in the world of heavyweight combat support vehicles. The order is worth around C$54.7 million (€40 million).

Rheinmetall has thus succeeded in winning another important contract in Canada as well as adding a new chapter to the Büffel/Buffalo ARV success story: Canada will be the eighth country to field the system.

The recently signed contract encompasses the manufacture and delivery of the tracked armoured vehicles as well as the provision of related training support. They will be equipped with the latest force protection features, making them more than a match for the kind of threats encountered in modern deployed operations, e.g. in Afghanistan.

Delivery of the armoured recovery vehicles is slated to take place in 2013-2014. The Canadian military are furnishing a number of Leopard 2 tank chassis from their inventory, which Rheinmetall will convert into Büffel/Buffalo ARVs. The project will be carried out in Germany at Rheinmetall's Kiel and Kassel plants as well as in Canada in cooperation with its subsidiary Rheinmetall Canada and other Canadian companies.

Rheinmetall Canada is currently engaged in a major programme to modernize and modify 42 Leopard main battle tanks which the Canadian military took over from the Dutch armed forces in 2007.

The Canadian Army has already been using the Büffel/Buffalo ARVs in Afghanistan since 2007. Drawn from the Bundeswehr inventory, Rheinmetall optimized the vehicles prior to deployment, fitting them with added force protection features.

Known as the Bergepanzer 3 Büffel (BPz 3) in German, the Büffel/Buffalo ARV is based on the Leopard 2 chassis, and was jointly developed on behalf of the German and Dutch armies. It is designed for recovering disabled tanks as well as for conducting maintenance and repair work under field conditions. Thanks to a built-in crane, the Büffel/Buffalo is able to exchange a Leopard 2 powerpack or complete turret. Besides a powerful hydraulic crane system, this cutting edge ARV is equipped with a robust winch system and a combined dozer and stabilizing blade.