Rheinmetall: ready to team with India 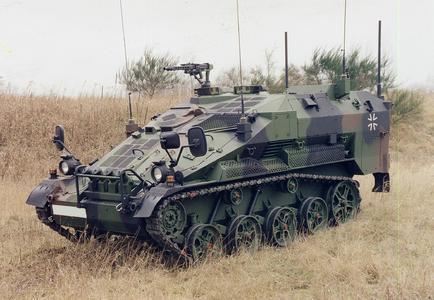 (PresseBox) ( Düsseldorf, 12-03-02 )
Without a doubt, India is the regional superpower of South Asia. Its armed forces form a mainstay of Indian security policy, and are now undergoing further modernization. Facing up to the challenges of an expanded mission spectrum, they rely increasingly on network-enabled operations: a "system of systems" consisting of sensors, C4I capabilities and effectors that enables an appropriate response to any and all threats.

From 29 March to 1 April 2012, Defexpo will take place in New Delhi. It is one of the largest defence technology trade fairs in Asia.

As one of the world's leading suppliers of defence technology systems, Rheinmetall will be on hand with a representative selection of its diverse array of products for military and security forces. Building on a proud tradition, the Düsseldorf, Germanybased Rheinmetall Group covers many different capability categories.

In order to operate in difficult terrain - in the mountains, for example, or in an urban environment - today's armed forces need a flexible, quickly deployable, protected platform that can be readily integrated into network-enabled operations and which, above all, can be transported by air either on board or as underslung cargo. It was precisely with these capabilities in mind that Rheinmetall developed the Wiesel ('weasel') family of vehicles, which the company will be presenting at Defexpo 2012.

A lightweight tracked armoured vehicle, the Wiesel is standard equipment in German airmobile and mountain units. While the Wiesel 1 was originally employed as a weapons platform, the somewhat longer Wiesel 2 is now available in numerous other configurations.

Much like other Rheinmetall vehicles - e.g. the Fuchs/Fox armoured transport vehicle - the Wiesel has accompanied the Bundeswehr right from the start in every deployed operation. Whether in the deserts of Somalia, the mountains of Kosovo or the rugged terrain of the Hindu Kush - the Wiesel has what it takes: high mobility coupled with protection. Transportable by air in a medium transport helicopter or as underslung cargo, the various members of the Wiesel family can be quickly deployed to new flash points. The Wiesel is thus the ideal platform for the Mountain Strike Corps, which is now in the process of formation.

Countering the threat from above: advanced air defence systems

In the domain of VSHORAD technology, Rheinmetall's Air Defence division is the global leader and the sole single-source supplier of battle management systems, fire control systems, automatic cannon, integrated missile launchers and Ahead ammunition. Its core competencies include the development and manufacture of complete air defence systems as well as simulators and training equipment.

The need for a 35mm gun-based air defence system able to meet current and coming requirements led to the recent development and manufacture of the Oerlikon Skyshield air defence system. Lightweight and compact, it is the world's most advanced and effective system for low-level air defence. It basically consists of an Oerlikon Skyshield fire control unit and two high-performance Oerlikon Revolver Gun MK2 automatic cannons, specifically designed to fire Ahead airburst ammunition.

The heart of Rheinmetall's proprietary Ahead technology is a high-precision timedelay projectile. At the optimum moment, it ejects a lethal cloud of heavy metal pellets, reliably neutralizing small and even very small projectiles, such as rockets, artillery and mortar (RAM) rounds, much the way a shotgun shell destroys a clay pigeon.

This weapon has been successfully deployed in NATO operations since 1996. It forms the main armament of the Oerlikon Skyshield MOOTW/C-RAM system, which the German Bundeswehr has procured for defending its forward operating bases.

Furthermore, Rheinmetall's air defence technology is by no means limited to static defence roles. Mobile applications are equally feasible. For short-term missions, a truck-mounted version is available which can be deployed without unloading the system from the truck. This is particularly useful if the mission involves protecting a succession of different sites for short periods. Mounting a Skyshield air defence system on an all-terrain 8x8 vehicle - e.g. a military truck made by Rheinmetall's partner Tata - ensures maximum operational flexibility.

Existing Skyguard and Skyshield systems can also be retrofitted with Ahead technology. Furthermore, thanks to the modularity of its systems, Rheinmetall is able to bring additional components into play, readily creating multi-mission capabilities tailored to the needs of individual clients.

C4ISTAR - Enhancing your vision, your impact and your information

As one of the world's leading suppliers of defence technology systems, Rheinmetall is an increasingly important partner in the field of C4ISTAR systems. The Group's product spectrum ranges from single sensors and components to sensor platforms and fire control units, and from individual soldier systems to complete battle management systems.

These sensor and fire control systems represent top-notch technology and are in service with a number of armed forces worldwide.

Rheinmetall has longstanding experience in equipping combat platforms with sensor and fire control systems. To enable customers to cope with today's requirements, Rheinmetall has developed digital turret and vehicle systems that provide modular and flexible solutions for a variety of combat and turret systems, as well as to standard vehicles e.g. for law enforcement or security surveillance missions. Due to the technology applied and the system architecture these solutions can be used either for adapted upgrades or fully integrated solutions for systems under development.

As part of these digital turret and vehicle systems the Situational Awareness System (SAS), for example, on show at Defexpo 2012, is a complete panoramic close-up sight for local situational awareness. It can be integrated easily into turret or chassis and offers a 360° - both day and night sight - near-field view of the vehicle's immediate surroundings, with automatic alarm and target-tracking functions. SAS provides outstanding "look through armour", increases the safety and reduces the workload of the crew thanks to a high degree of automation.

The situational awareness of a combat vehicle can be complemented by the vehiclemounted version of Rheinmetall's Acoustic Sniper Locating System (ASLS). ASLS comprises a powerful microphone antenna array with integrated analysis electronics as well as a control and display functions inside the vehicle.

When a round is fired ASLS instantly computes azimuth, elevation and distance of the sniper relative to the vehicle. Simultaneously ASLS alerts the crew acoustically and visually, displaying the results of the location analysis on the vehicles manmachine- interface in real-time. In combination with the fire control system of the vehicle's the crew can react within no time and start to engage the enemy position, before the next round is fired. Additionally, the geo-referenced position of the sniper - determined with a GPS system - can be fed into a C4I system, e.g. for information of other forces in the area, target assignment or subsequent engagement. ASLS is also available in a stationary version and a man-portable version, which can be connected to modern soldier systems.

In the field of soldier systems, Rheinmetall was awarded a contract by the German Army in 2011 to deliver the cutting edge "German Future Soldier - Expanded System". The IdZ2 (formerly IdZ-ES) enhances the battle performance, endurance and protection of modern war-fighters on the ground and embeds them directly into the network-centric operations loop. Visitors will see the IdZ2 during Defexpo.

Rheinmetall also maintains an extensive network of international partnerships for serving new markets as well as enabling technology transfer that will substantially benefit both the industry and the military of customer nations. This makes Rheinmetall the ideal industrial partner in the quest to supply India's armed forces with advanced capabilities.