Rheinmetall at MILIPOL: a versatile partner for modern first responders 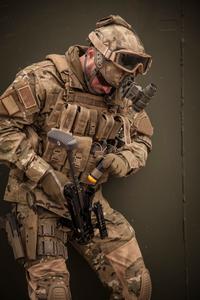 (PresseBox) ( Düsseldorf, 13-11-15 )
Military and tactical law enforcement units today have to perform a multifaceted range of challenging tasks. Around the world, Rheinmetall stands shoulder-to-shoulder with these vital first responders, ready to supply them with an extensive array of state-of-the-art systems and equipment. An interesting selection of the Group's products and services for law enforcement agencies, paramilitary units, SWAT teams and the military is on display at the MILIPOL tradeshow in Paris, 19-22 November 2013, booth 5P064. One of the world's foremost suppliers of military and security technology, Rheinmetall covers a multitude of capability categories.

Among other items, the Rheinmetall Electro-Optics division is showcasing a number of night observations for a multitude of different applications, ranging from GN night vision goggles and the KN night vision scope to KDN night vision binoculars.

In the world of infantry weapons, the principal forces driving future development are modularity, scalability, lethality and expandability. But a number of other factors also contribute to combat effectiveness, including a counter-defilade capability (for engaging targets behind vertical cover), plus greater range, penetrating power and first round hit probability. Other requirements include cost efficiency, an ability to integrate them into other weapon and C4I systems, and - by no means least - safety. In achieving the latter, insensitive munition characteristics make a major contribution: insensitive projectiles and propellant won't explode if fired on or exposed to flames.

Rheinmetall's wide-ranging activities in the field of 40mmm ammunition meet all these criteria. The Group has been systematically expanding its family of 40mm ammunition. A recent addition is a long-range 40mm x 46 round. Compared with previous low-velocity ammunition, it has an initial velocity of 100 rather than 78 m/sec. Another new round is the 40mm x 46 "Magnum". Featuring an initial velocity of 136 m/s, it can only be fired from medium-velocity grenade launchers such as Rheinmetall's Cerberus and Hydra. Both of these weapons are equipped with built-in recoil attenuation systems and can be fitted with fire control unit/aiming devices. They are designed not just for greater accuracy, but also to fire programmable airburst ammunition that can be timed to detonate directly over the target. Corresponding cartridges and fire control systems such as Vingmate are already available for the 40mm x 53-high velocity ammunition on show at MILIPOL.

Vingmate consists of an aiming device and fire control computer together with a combined tripod and gun cradle suitable for various 40mm automatic grenade launchers as well as .50 cal. machine guns. Because the fire control computer can be programmed with up to ten firing tables, the Vingmate system's effector can be quickly switched without having to readjust the particular weapon being used. The Canadian armed forces have procured a variant of the Vingmate system for their Close Area Support Weapon (CASW).

Also on hand are the Vingmate MultiRay (Vingmate MR), a fire control unit and aiming device, and the friend-or-foe Dismounted Soldier Identification Device/DSID. The new Vingmate MR is substantially more compact and lighter than its FeLVis forerunner, and is suitable for low- and medium-velocity 40mm ammunition including air burst rounds. It features a laser rangefinder, an integral ABM programming unit, is able to detect if the weapon is at an incline, and also calculates the necessary lead. In addition, it is equipped with a laser pointer, an IR laser pointer invisible to the human eye, and an electronically focusable IR illuminator.

Rheinmetall Electro-Optics is also presenting its tried-and-tested laser light modules, including the LLM01, deployed by many armed forces and law enforcement agencies worldwide. On show too is the Vario-Ray, or LLM-VR, a component (among other things) of Rheinmetall's Gladius future soldier system, which the Bundeswehr already deploys in Afghanistan under the name IdZ-ES.

Rheinmetall has developed an easy-to-mount digital aiming device for Fly-K, a lightweight mortar system which, among other things, has been successfully deployed by the French armed forces in Afghanistan. This device measures the incline and elevation angle of the mortar tube and then displays the range of the mortar rounds. This lightweight, compact, quiet, low-signature indirect fire weapon can of course also be used without the aiming device for engaging targets at ranges of up to 650 metres. It will soon be upgraded to approximately 900 metres.

In the ordnance field, Rheinmetall is presenting its improved flash-bang stun grenades, which are based on bottom-top venting technology. Their new chamber system is designed for two different decibel levels: 180 dB for military applications and 170 dB for law enforcement operations. The new generation offers greater flexibility, with a choice between two flash-bang charges, one conventional, the other, perchlorate-free. The new perchlorate-free grenades have the added advantage of producing less smoke.

To enable its customers to detect and engage opponents around the clock, Rheinmetall makes Mithras, a family of handheld rockets with ranges of 300, 600 and 1,000 meters, available in normal and IR versions. The armed forces of Denmark, Estonia, France, Great Britain, Lithuania, Oman and Thailand all field Mithras rockets.

Just as importantly, Rheinmetall is also a leading source of force protection technology. At MILIPOL, the spotlight is equally on Rheinmetall Ballistic Protection's activities. VERHA, short for "Versatile Rheinmetall Armour", designates a family of protection products that includes advanced solutions for ground, air and maritime applications as well as components for ballistic vests.

Following a recent string of orders, the Group is currently supplying a wide variety of protection systems to civilian and military users alike. Among these are partial armour protection for a foreign navy and carbon fibre protection components for armoured premium-class limousines and ballistic vests.

During the run-up to the latest G8 summit meeting in Lough Erne, Northern Ireland on 17-18 June 2013, Rheinmetall was able to respond at very short notice to a major order from the UK, swiftly supplying several thousand hard ballistic "VERHA Inserts" to provide added protection to police deployed to secure the summit. Made of composite material, VERHA hard ballistic inserts significantly increase the effectiveness of ballistic vests, as they can even stop rifle bullets.

For the first time at MILIPOL, the Group's easy-to-install solution for protecting helicopter cockpit seats is on display too. Also Rheinmetall will show its latest developments of lightweight composite hard ballistic "VERHA Inserts" at the show.

Rheinmetall's presence at MILIPOL 2013 underscores once again its status as a versatile partner of the world's armed forces and security services.