Rheinmetall at IDEX 2017 - a strong partner of the security services 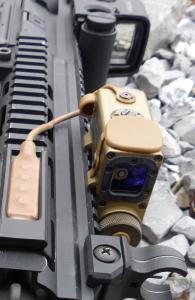 (PresseBox) ( Düsseldorf, 17-02-19 )
From 19 to 23 February 2017, Rheinmetall is showcasing its products and capabilities at the International Defence Exhibition IDEX – one of the most important defence and security shows in one of the world’s most strategically sensitive regions.

Underscoring its longstanding reputation as a reliable partner to the world’s security forces, at IDEX 2017 the Group is unveiling the following products and technologies at the Rheinmetall stand 09-A10:

- Multi-Mission Unmanned Ground Vehicle: it can be readily equipped for a wide range of uses either with customer-specific or Rheinmetall subsystems;

- ‘below Patriot concept’: a solution for neutralizing projectiles that cannot be stopped with larger, missile-based air defence systems;

Nations today face a security challenge that transcends conventional military and asymmetric threats. In our networked world, safeguarding cyberspace has become a matter of vital strategic importance. The same is true when it comes to protecting critical infrastructure and borders. For the first time ever, Rheinmetall is presenting its activities in the field cyber defence. These include _cyel equilibrum, the Group’s cyber network security solution, and its "cyobs" cyber radar. The latter measures, analyses and visualizes cyberspace, making it visible and manageable. Cyobs is an important means of fostering cyber situational awareness.

In military and law enforcement contexts alike, robotics is playing an increasingly important role. On show for the first time at this year’s IDEX, Rheinmetall’s new Multi-Mission Unmanned Ground Vehicle lends itself to a wide range of uses: tactical surveillance, CBRN detection, radio relay station, transport operations, casualty evacuation and/or as an effector platform. It can be readily equipped for these roles either with customer-specific or Rheinmetall subsystems.

Moreover, Rheinmetall also offers multifaceted, integrated solutions for protecting critical infrastructure. One of the great strengths of the Düsseldorf, Germany-based specialist for mobility and security is its ability to network various sensors and effectors into a fully integrated system of systems.

The motto "Leadership in Cannon Design" epitomizes Rheinmetall’s comprehensive expertise in the field of medium-calibre technology. From 20mm x 128 to 35mm x 228, Rheinmetall covers all standard calibres – whether for gas-operated, revolver guns or externally powered weapons. In addition, the Group supplies an extensive array of highly effective ammunition for applications of all types.

Likewise debuting at IDEX 2017 is Rheinmetall’s 27mm revolver gun, the Sea Snake-27, a weapon specifically designed for maritime applications. Based on the Group’s tried-and-tested MLG-27NG lightweight naval gun (also on display at IDEX), the Sea Snake 27 features a multimode, multiple-target tracker sensor unit. A highly effective all-round effector for engaging targets at short and very short ranges, it is ideal for neutralizing asymmetric threats, whether employed as a suppression weapon or in high-precision single-shot mode.

Also on display at the Rheinmetall stand is the 20mm Fieldranger, the first of a new family of weapon stations. These include the stabilized, fully digital Amarok for light and medium machine guns, and the Qimek for heavy machine guns, both of which are on show as well. Another Rheinmetall medium-calibre automatic cannon on display at IDEX is the Oerlikon Revolver Gun Mk3, a ground-based air defence system that simultaneously emphasizes the Group’s leading role as a tech enterprise dedicated to security and mobility.

Rheinmetall likewise remains on the cutting edge of tank gun development. The 120mm smoothbore technology used in the main armament of the Leopard 2 and M1A1 Abrams continues to set the global standard. Rheinmetall is currently working on new forward-looking technologies. On the one hand, efforts are underway to enhance the performance of 120mm tank guns. But the Group is also pressing ahead with development of 130mm main armament for future combat vehicle systems. The first successful live fire trials took place in December 2016. Visitors to IDEX can familiarize themselves with Rheinmetall’s extensive expertise in the domain of weapon systems and ammunition.

At IDEX 2017, the cannon is integrated into a ‘below Patriot concept’. Here Rheinmetall is presenting a solution for neutralizing projectiles that cannot be stopped with larger, missile-based air defence systems – e.g. mortar rounds, small missiles, drones, etc. – or which slip through the defensive belt as ‘leakers’. Besides automatic cannon, other effectors in the five highly realistic scenarios depicted include high-energy lasers and the Cheetah missile.

A world leader in tactical mobility

Rheinmetall’s Vehicle Systems division is one the world’s top names in tactical mobility. Its portfolio ranges from trucks and wheeled armoured vehicles to heavyweight combat vehicles. The Fuchs/Fox wheeled armoured transport vehicle numbers among the Group’s longest-serving products. The vehicle on display at IDEX 2017 is the NBC reconnaissance version. Underscoring Rheinmetall’s unsurpassed expertise in the main battle tank domain, the Leopard 2 PL is also on show in Abu Dhabi. A TGS 4x4 and an HX 77 represent the division’s logistics acumen. The HX family – a line of military-off-the-shelf products – constitutes the core of a globally deployable fleet of high-mobility transport vehicles, equipped where necessary with threat-commensurate force protection features. Roughly 10,000 of these vehicles are already in service around the world. This results in major advantages with respect to interoperability and logistics, particularly when it comes to multinational operations. Vehicles of the HX family range in size from 4x4 to 10x10. The variety of potential configurations is huge: cargo vehicles, tankers, recovery vehicles, system platforms, folding road and bridge-laying systems – practically anything is possible.

Rheinmetall is one of the world’s leading sources of simulation and training solutions for army, air force and naval operations. The spectrum ranges from e-learning to the design, installation and operation of large-scale training centres. Visitors to IDEX can gain an idea of Rheinmetall’s expertise in this field from the Leopard Gunnery Skills Trainer, used to develop and sustain the skills for crews of armoured fighting vehicles. The Group is also presenting its family of Legatus live training products. Installed in stationary and mobile training facilities, these systems enable troops to prepare for complex military operations in open and urban terrain under outstanding realistic conditions.

Rounding out the array of Rheinmetall products and services on show at IDEX are the Group’s soldier systems, high-performance optics and sensors as well as its force protection solutions. For example, visitors can learn about the latest laser light modules and fire control technology for infantry weapons; sensor platforms; and mortar, tanks and artillery ammunition. Other focal points include the Multi Ammunition Softkill

System MASS for maritime applications, and the Gladius and Argus soldier systems, which enable integration of individual infantrymen into the network-enabled warfare loop.

We look forward to welcoming you to our stand 09-A10!