Rheinmetall and Sikorsky will collaborate to lead a team of German industrial providers to offer the best solution for STH, including dependable maintenance, training and other program support for the German Armed Forces 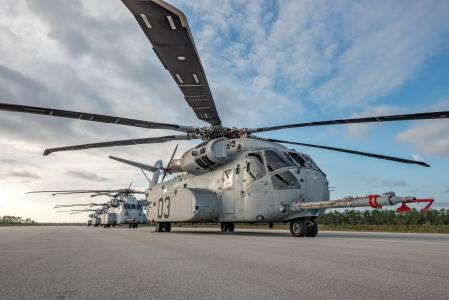 Rheinmetall brings a wealth of experience and knowledge to the Sikorsky STH team. With Sikorsky’s breadth and depth of heavy lift experience and Rheinmetall’s leadership as the lead teammate for STH sustainment, the German Air Force will experience the high levels of aircraft availability and reliability that Sikorsky customers have come to expect.

"With Rheinmetall as the strategic partner for Sikorsky, we are convinced that together we provide the best possible state-of-the-art aircraft for the German Air Force as successor for the legacy CH-53G fleet," said Armin Papperger Rheinmetall CEO. "Furthermore, we stand strongly together in offering a cost-effective, reliable solution oriented to the needs of today’s operations, and able to evolve with the Armed Forces as its needs change over time."

"Sikorsky has a 45-year history supporting the German Armed Forces fleet of CH-53G aircraft, and we are humbled by the opportunity to continue to serve the German Armed Forces for another 45 years with Sikorsky’s CH-53K," said Dan Schultz, president of Sikorsky. "As a former CH-53 pilot, I can attest that this aircraft is truly the most capable heavy lift helicopter we have ever built. Sikorsky’s CH-53K, combined with Rheinmetall as our key German partner, is a winning solution for STH."

Sikorsky and Rheinmetall will look to introduce more German teammates in the weeks to come. The team will leverage and build upon the deep knowledge and expertise of the German defense industry.

The CH-53K King Stallion advances Sikorsky’s 50 years of manufacturing and operational success of its CH-53A, CH-53D/G, and CH-53E. Built to thrive on the 21st-century battlefield, including shipboard operations, the CH-53K aircraft is an all-new aircraft, using modern intelligent design. The rugged CH-53K is designed to ensure reliability, low maintenance, high availability and enhanced survivability in the most austere and remote forward operating bases.

The U.S. Marine Corps will field the CH-53K as a fully-operational aircraft in 2019. By the time Germany receives its first aircraft, the CH-53K will have been in service with the U.S. Marine Corps for five years. The CH-53K provides the German Armed Forces with a proven heavy lift helicopter that can be entered into service seamlessly without need for upgrades for the next several decades.

The CH-53K helicopter is the best choice for completing missions like humanitarian aid, troop transport, casualty evacuation, support of special operations forces, and combat search and rescue. No matter the mission, the aircraft provides the highest degree of safety for its crew and occupants in all conditions.

With the legacy fleet of the CH-53G, Sikorsky has a long lasting strong relationship with the Bundeswehr, which Sikorsky looks forward to strengthening with the CH-53K. The CH-53K will enable the German Armed Forces to conduct real heavy lift operations. Intelligent, reliable, low maintenance and survivable, the CH-53K is the future of German Heavy Lift.

Headquartered in Bethesda, Maryland, Lockheed Martin is a global security and aerospace company that employs approximately 100,000 people worldwide and is principally engaged in the research, design, development, manufacture, integration and sustainment of advanced technology systems, products and services.

The Rheinmetall Group is a high-tech enterprise specializing in mobility and security solutions. Consisting of three divisions - Vehicle Systems, Electronic Solutions and Weapon and Ammunition - the Group's Defense arm is one of the world's foremost defense technology organizations. Its wide array of products ranges from vehicle, force protection and weapon systems to infantry equipment and air defense technology, and from engagement sequence networking to sensors and electro-optics as well as advanced simulation and training solutions. With some 23000 employees worldwide, the Düsseldorf based Group generated sales of €5.6 billion in 2016.