Subscribe to news
(PresseBox) ( Düsseldorf, 17-02-19 )
Ammunition with fixed or flexibly programmable detonation times significantly enhances the firepower of conventional effectors. Visitors to IDEX 2017 can find out more about Rheinmetall’s various technologies in the field of delayed detonation and airburst ammunition.

In the infantry weapons domain, Rheinmetall offers an airburst hand grenade designed to detonate at a fixed, adjusted point in time. In the target zone, the grenade rights itself with the help of steel spring legs. An explosive charge is then vertically launched, detonating at a height of approximately 1.5 to 2 metres. It is already in service with the Swedish armed forces.

With Rheinmetall’s 40mm x 53 ABM airburst ammunition, the detonation time can be programmed. This takes place as the projectile is leaving the barrel, transmitted by infrared signal from the fire control aiming unit. The round detonates at an exactly determined distance above the target, even when behind cover. Therefore this innovative ammunition substantially enhances the combat effectiveness of all standard 40mm automatic grenade launchers. When teamed with the right fire control technology – Rheinmetall’s Vingmate aiming device, for example – the ammunition has a maximum effective range of up to 2,200 metres. The armed forces of Germany and the Netherlands have qualified this advanced ammunition technology, which Rheinmetall continues to refine and perfect. Dubbed the DM131 by the German procurement authorities, the 40mm x 53 Airburst round has already been delivered. Furthermore, Rheinmetall is well known to the Canadian armed forces as the supplier of the 40mm Close Area Suppression Weapon system.

In the medium-calibre munitions realm, Rheinmetall’s proprietary AHEAD technology features an airburst capability. Each ABM round is programmed at the muzzle as it leaves the barrel. As opposed to programming when the ammunition is fed into the weapon, this approach offers the advantage that the exact initial velocity of each round is calculated and taken into account when programming the airburst detonation point. This contributes to greater accuracy and lethality.

When it comes to air defence, Rheinmetall’s AHEAD technology offers a superior means of neutralizing small, fast-flying projectiles such as rockets, artillery and mortar rounds (RAM). Here, in shotgun-like fashion, the ABM round ejects its payload of tungsten subprojectiles in the path of the oncoming target. Relying solely on kinetic energy, the lethal cloud of spin-stabilized, cylindrical tungsten pellets results in a kill probability never attained before. Setting the standard for all 35mm fire units and already in service with the armed forces of several nations, it is impervious to electronic countermeasures.

Infantry fighting vehicles fielded by Denmark, Estonia and the Netherlands now feature 35mm ABM technology from Rheinmetall. Furthermore, the main armament of the German Bundeswehr’s new Puma infantry fighting vehicle is the ABM-capable, gas-operated MK30-2/ABM 30mm automatic cannon. ABM ammunition makes it possible for the crew to take out targets, even at long ranges or behind cover. Other new Rheinmetall developments include the externally powered 30mm "Wotan" automatic cannon, which is also ABM-capable.

With Rheinmetall’s 120 mm x 570 HE Temp. DM11 programmable HE tank ammunition, the cartridges are programmed after loading. The necessary system modification (Programmer Kit) can be easily retrofitted into any main battle tank platform equipped with a 120mm smoothbore gun and modern fire control unit.

The ammunition can be used in three different fuse modes:
Under the name "Multipurpose (MP) DM11", the DM 11 is already in service with the United States Marine Corps, which uses it first and foremost in asymmetric scenarios against non-armoured and semi-hard targets. In the Bundeswehr, the "120mm HE Temp. DM11" has been introduced as the new standard High Explosive (HE) round (secondary ammunition). Other Leopard 2 user nations are currently taking delivery of initial stocks of this ammunition, furthermore the most advanced and effective HE tank round worldwide. 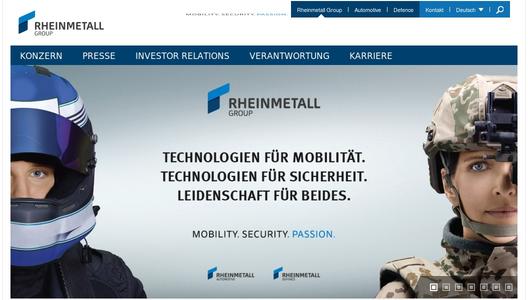