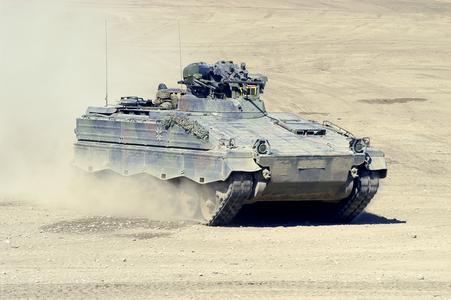 (PresseBox) ( Düsseldorf, 12-02-28 )
The seismic shifts taking place in global geopolitics are confronting the rising medium-sized powers of South America with new challenges too. The countries that form the Unión de Naciones Suramericanas (UNASUR) are increasingly coordinating their foreign and security policies, and are shouldering greater international responsibility. Security policy has emerged as a matter of common concern. Combat-ready armed forces with modern equipment form a core element here - whether the mission is defending territorial integrity, protecting the population from political oppression, or taking part in international peacekeeping and peace-enforcement operations.

From 27 March to 1 April 2012, FIDAE 2012 will take place in Santiago de Chile. FIDAE is one of the largest defence technology trade shows in South America. As one of the world's leading suppliers of defence technology systems, Rheinmetall Defence will be on hand with a representative selection of its diverse array of products for military and security forces. Building on a proud tradition, the Düsseldorf, Germany-based Rheinmetall Group covers many different capability categories.

Main battle tanks combine protection, mobility and firepower, and the same is true of infantry fighting vehicles, with the added benefit of additional troop-carrying capacity. Together they form the core element of modern, high-mobility military operations, hard-hitting yet capable of reacting to threats in scalable fashion.

Even older legacy systems can be retrofitted to meet the latest operational requirements.

At FIDAE 2012, Rheinmetall Defence, one of the world's most experienced system integrators, will be displaying some of its high-tech solutions for upgrade programmes. On show will be an infantry fight vehicle whose modernized protection features are specifically designed to counter today's battlefield threats.

The configuration showcased here includes add-on armour, a spall liner and anti-mine seats decoupled from the floor of the vehicle, all designed and installed by Rheinmetall Chempro. These features provide crews with reliable protection from RPG attacks, APFDS-T rounds and antitank guided missiles with tandem shaped charges, and landmines. All of these force protection components can be quickly retrofitted into existing vehicles without impairing their mobility.

Protection systems at sea and on land

Rheinmetall's "Multi-Ammunition Softkill System" (MASS) is a fully automatic means of protecting ships on the high seas and in coastal waters from symmetric and asymmetric threats.

When MASS detects an incoming threat, it takes into account the azimuth, altitude, distance, number and sequence of projectiles before launching appropriate countermeasures at precisely the right moment. The company's new programmable omnispectral decoys - 32 per launcher - provide reliable protection in all relevant wavelengths of the electromagnetic spectrum (radar, infrared, laser, EO and UV). There is thus no need for the vessel to take evasive action. Rheinmetall's "Multi-Ammunition Softkill System" (MASS) is a fully automatic means of protecting ships on the high seas and in coastal waters from symmetric and asymmetric threats.

The system has proven highly effective in various international trials. The navies of 11 nations now deploy MASS, with some 186 launchers installed on board 22 different classes of vessel.

Besides MASS, Rheinmetall will be presenting the latest generation of Bullfighter decoys at FIDAE. These can be used in existing Super Rapid Bloom Offboard Countermeasures (SRBOC) and other 130mm systems. Moreover, visitors can view a variant of the company's Rapid Obscuring System (ROSY) specifically designed for small naval vessels such as fast attack craft and rigid hull inflatable boats. It helps to protect sailors, coast guards and special operations forces units operating in coastal waters and on rivers.

Made by Rheinmetall Chempro, the innovative Mobile Modular Protection System, or MMS, rounds out the Group's array of maritime force protection products. It provides fast, extremely flexible protection that can be quickly set up in all climate zones, including in rough terrain, in full accordance with STANAG 4569.

In the domain of cannon-based air defence technology, Rheinmetall is the global leader and the sole single-source supplier of battle management systems, fire control systems, automatic cannon, integrated missile launchers and Ahead ammunition. Its core competencies include the development and manufacture of complete air defence systems as well as simulators and training equipment.

At FIDAE 2012, the Chilean Air Force will be displaying two Rheinmetall-made air defence system components: an Oerlikon GDF007 Twin Gun and an Oerlikon Skyguard 3 Fire Control Unit. In addition, visitors to the Rheinmetall stand can learn about Ahead technology and the Skyshield system, which offers reliable protection from rocket, artillery and mortar (RAM) fire.

New tank ammunition and medium-calibre technology for the modern battlefield

The Group's innovative 120mm x 570 HE Temp. DM11 tank round can be fired in all climate zones from any 120mm smoothbore gun. From the technical standpoint, two factors make the 120mm x 570 HE Temp. DM11 round a standout: it is programmable when loaded and possesses an airburst capability. In order to fully exploit the ammunition's operational potential, it features three different fuse modes:
- Impact fuse mode/point detonation (PD); here the warhead detonates inside the target medium in order to produce larger breaches;
- Programmable delay/point detonation with delay, PDwD); here the warhead detonates after penetrating a wall, etc.;
- Programmable airburst mode (AB mode); here, at a range of up to 5,000 metres, the warhead detonates either in front of or above the designated target.

Referring to it as the "Multi Purpose (MP) DM11", the United States Marine Corps already uses the DM11, primarily for engaging non-armoured and lightly armoured targets in asymmetric conflicts.

A brand-new type of ammunition, the RH31 High Explosive Super Quick (HESQ), will be available starting in autumn 2012. This 120mm round is designed for creating breaches and producing shrapnel fragments, making it highly effective against lightly armoured targets. Lower priced than the DM11, the new round features a non-programmable impact fuse (impact fuse mode/delay fuse mode), meaning that it can be fired from any standard 120mm smoothbore tank gun without the need for system modification.

The Rheinmetall MK30-2/ABM automatic cannon is an open-bolt gas-operated weapon with selectable ammunition feeding. It fires programmable airburst rounds as well as conventional 30 x 173mm-cal. ammunition. This automatic cannon is based on the internationally acclaimed Mauser MK30-2, which serves as standard armament for infantry fighting vehicles in Austria, Portugal and Spain.

Apart from Rheinmetall's tried-and-tested "Ahead" ABM technology, the MK30-2/ABM is characterized by ease of use and high reliability. As it leaves the muzzle, the projectile is programmed to eject its sub-ammunition at the optimum point in time, making it extremely effective against numerous modern battlefield threats.

Thanks to its rate of fire of 200 rounds per minute and maximum effective range of 3,000 metres, it reliably takes out targets on land, at sea and in the air. The German Bundeswehr is procuring this automatic cannon for its new Puma infantry fighting vehicle.

Well aware of the importance of having "boots on the ground", Rheinmetall is also an important partner of the infantry.

Further proof of Rheinmetall's leadership role in the 40mm ammunition domain is found in its array of 40mm x 46 (low-velocity/LV and medium-velocity/MV) and 40mm x 53 high-velocity (HV) products. These range from practice cartridges to highly effective service ammunition. Only recently, the company held an impressive live fire demonstration of its time-delay airburst grenades (40mm x 46 MV and 40mm x 53 HV) for members of the international land forces community at its proving ground at Unterluess in northern Germany. Designed especially for firing medium-velocity ammunition, Rheinmetall has developed the Cerberus grenade launcher and the Hydra automatic grenade launcher. Both feature hydraulic shock absorbers which help to reduce the recoil force to the level of LV ammunition.

Rheinmetall has also developed a quick-mounting digital aiming device for the Fly-K mortar, a system successfully deployed by the French armed forces in Afghanistan. The device measures the incline and elevation angle of the tube, while showing the range of the cartridges on a display. Light, compact, quiet and with a very low operational signature, this indirect fire weapon can of course also be used without an aiming device to engage targets at distances of up to 800 metres.

Among other Rheinmetall indirect fire products on display at FIDAE 2012 will be its new family of 60mm mortar ammunition. Optimized for insensitivity, it meets or exceeds STANAG 4439 norms, and encompasses service and practice ammunition, including insensitive high explosive (IHE), high explosive (HE), three types of smoke/obscurant (WP, RP multispectral and TTC) as well as illumination rounds (visible and infra red).

At FIDAE 2012, Rheinmetall will once again be demonstrating its versatility and reliability as a globe-spanning supplier of systems and equipment for the world's armed forces and security services.