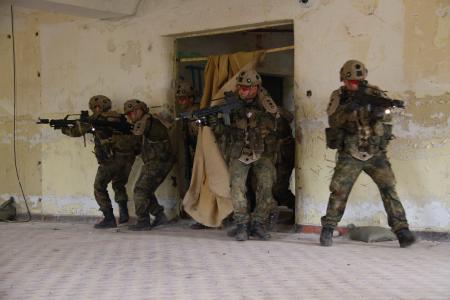 (PresseBox) ( Düsseldorf, 16-09-02 )
The Rheinmetall Group of Düsseldorf has won another important export order in the simulation technology domain. A military customer from the Middle East-North Africa (MENA) region has contracted with the Group to equip an ultramodern facility where troops can practise combat operations in urban terrain. The order is worth an eight-figure euro amount. A complete ‘training city’ site will be constructed in the customer country, whose technical features will make it the world’s most advanced training centre for preparing soldiers and security personnel for urban operations.

Overcoming international competitors and drawing on the Group’s extensive experience, the compelling proposal put forward by the Simulation and Training unit of Rheinmetall’s Defence arm once again won the day. Rheinmetall will equip urban infrastructure specially constructed by the customer with a complete array of simulation technology, creating a unique, high-tech training environment.

Core elements include a high-performance wireless data and position locating system as well as a state-of-the-art control and evaluation centre, to include presentation systems for exercise briefings.

Advanced Laser Engagement System, designed to take into account the special requirements of urban operations and house-to-house fighting, make it possible to bring a full range of participants into the exercise loop, including their weapons and vehicles. For example, every combat vehicle involved in the exercise is fitted with laser receivers that also enable vehicles to be engaged from above. From the control and evaluation centre, the status and position of all exercise participants can be monitored in real time, even when they are inside buildings. In addition, it is possible to simulate the impact of indirect fire on building interiors, e.g. from artillery and mortars.

In order to enable realistic training for operations in a complex urban setting, a new ‘city’ was constructed in the customer country precisely for this purpose, consisting of more than 150 buildings. It includes residential districts with multi-storey terraced houses and detached suburban-style villas as well as shopping centres, a school, a hospital, sport facilities, government buildings and embassies. High-rise buildings up to nine storeys tall represent apartment houses, office buildings and hotels. The complex also features a complete urban road network, including bridges across a river.

The training facility is suitable for simulation-supported force-on-force exercises with Laser Engagement System as well as for live fire operations.

A virtual simulation system for prior tactical training of leaders also forms part of the package. For sections of the facility where live firing takes place, a video monitoring system will be installed.

In future, formations ranging in size up to reinforced battalion battle groups will be able to sharpen their combat skills in a hyper-challenging, hyper-realistic urban environment, aided by the very latest simulation technology.

The newly awarded contract from a customer in the MENA region underscores once again Rheinmetall’s leading role in the world of advanced training and simulation systems.