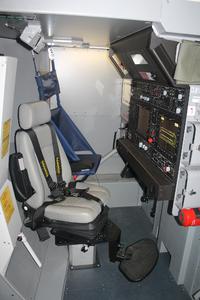 (PresseBox) ( Düsseldorf, 15-09-25 )
At an official ceremony on 2 September 2015, the ‘Cargo Hold Trainer - Enhanced’ (CHT-E) simulator for the A400M transport aircraft has recently been transferred to the Bundeswehr’s 62nd Air Transport Wing in Wunstorf, Germany.

In the presence of senior personnel from the 62nd Air Transport Wing and representatives of Airbus Military and Rheinmetall in the CHT-E facility building, the head of Rheinmetall Defence’s Flight Simulation product unit, Doris Lilkendey, symbolically presented the base commander with a laser-illuminated model of the cargo simulator for the A400-M.

Underscoring the importance of the new cargo hold trainer to his unit, Colonel Ludger Bette, commander of the 62nd Air Transport Wing, stated that, “the CHT-E is the most sophisticated system of its kind, and will support our training operations in excellent fashion. Its commissioning represents a major achievement for us, and will help us set new standards.”

Ms Lilkendey also thanked Airbus and the German Air Force for their excellent cooperation during the commissioning of the CHT-E: “We’re very pleased today to be contributing to the safety of future A400M crews with the Cargo Hold Trainer - Enhanced. We’re also proud to have reached today’s milestone after a trouble-free project, and would like to thank everyone who’s participated in the project.”

By June, Rheinmetall had already reached the “Ready for Training” milestone with the CHT-E, to the complete satisfaction of the customer and Airbus.

The A400M CHT-E is one of the most advanced training systems of its kind. Providing an authentic and realistic simulator for rear aircrew, ground crew and support crew personnel it features a full-sized replica cargo hold which is equipped with high-fidelity role equipment and cargo handling systems as well as genuine control panels, lifelike components and fully functioning, hydraulically operated surfaces.

The simulator also boasts an integral and innovative gallery-mounted, fully interactive instructor station for preparing, controlling and evaluating training exercises. As a result, the CHT-E is perfectly suited to all manner of rear aircrew training require¬ments. Initial type-rating qualifications in advanced airdrop and tactical procedures and operational methods are all achievable, as is practising essential crew resource management skills. Additionally and importantly, emergency drills can be trained and rehearsed to a level of competence not previously achievable in any other training environment.

The realistic cargo hold interior, with its aircraft-like functional components, provides an unmatched training resource for ground crew and support crew personnel. Mission-specific reconfigurations of the cargo hold, loading and unloading capabilities for the whole range of logistics and airdrop cargoes as well as training for aeromedical personnel in airborne hospital (Medical Evacuation/MedEvac) and ambulance roles are all perfectly possible, while the accurately functioning emergency components offer an excellent familiarization platform for emergency crews.

Although Airbus Military contracted with Rheinmetall Defence on 21 December 2012 to supply the Bundeswehr with a rear crew training simulator for the Airbus A400M transport aircraft, Rheinmetall built and installed the first CHT-E at the Airbus Military International Training Centre (ITC) in Seville, Spain; this has been operational and in full service since September 2013. The British Royal Air Force will see installation of the third CHT-E in Brize Norton in early 2016.

Besides developing and installing the CHT-E, to date Rheinmetall has built and installed three A400M ‘Loadmaster Work Station Trainers’ (LMWST). The first, installed in the Airbus Military International Training Centre (ITC) in Seville, has been in full operation since November 2012, with subsequent devices being commissioned for the French Armée de l'air at its training centre in Orleans in 2013, and for the British Royal Air Force in the A400M Training School in Brize Norton in 2014.