Force protection and firepower: the future arrives with formal transfer of Puma infantry fighting vehicle to the Bundeswehr 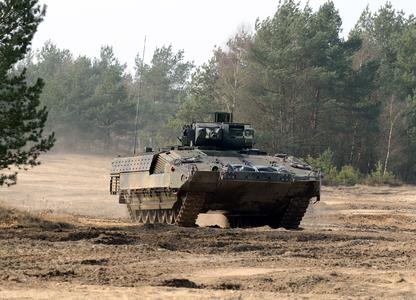 (PresseBox) ( Düsseldorf, 15-06-24 )
Rheinmetall and Krauss-Maffei Wegmann (KMW) formally handed over the Puma infantry fighting vehicle to the German Bundeswehr today, the most advanced system of its kind anywhere. One of the world's most ambitious projects in the field of army technology thus enters the utilization phase.

The Bundeswehr's fielding of the Puma IFV gives its mechanized infantry a new main weapons system that will gradually supersede the Marder, first introduced over forty years ago.

Delivery of all 350 infantry fighting vehicles will take place by 2020. Awarded to PSM GmbH in 2004, the contract today is worth around €4.3 billion, including separately ordered additional equipment. PSM is a joint venture of Rheinmetall and KMW, each of which holds a 50% stake in the company.

In joining forces to create the Puma, German defence giants KMW and Rheinmetall have produced a weapons system that represents an entirely new dimension in armoured vehicle design. The Puma is the perfect solution for operational scenarios of every kind in every climate zone, and sets new standards in all relevant capability categories.

But it is not just technology that makes the Puma so impressive. Far more, this highly successful project is the outcome of intense cooperation between the armed forces, the procurement authorities and the defence industry. It enabled the participating parties to bring this extremely complex - not least because of changing specifications in response to knowledge gained during the development phase -project to the point where it was ready for full-scale production. Moreover, despite many countervailing factors, it proved possible to stay within the original budget parameters set out in the contract.

Performance characteristics of the Puma

- Lethality. Thanks to its newly developed MK30-2/ABM 30mm automatic cannon and programmable ammunition, it can effectively engage a wide spectrum of targets, even behind cover.
- Mobility. The vehicle's hydro-pneumatic chassis and powerful engine make the Puma highly manoeuvrable even in the toughest terrain as well as enabling a top speed of 70 km/h. This means it can operate on the battlefield in tandem with the Leopard 2 tank.
- Survivability. A modular protection system consisting of active and passive components protects the crew from mines, improvised explosive devices, bomblets, shrapnel and ballistic threats such as shaped charges and kinetic energy rounds.
- C4I. Digitized command and control technology make it easier for the crew to operate the vehicle and its subsystems, simplifying command procedures and bringing the Puma directly into the networked operations loop.
- Reconnaissance. Advanced optics, optronics and sensors give the crew maximum situational awareness around the clock, enabling early detection and highprecision engagement of emerging threats.

Now that the Puma has entered active service with the German military, the first step is to train the trainers, just as planned. This process is already underway at a German Army training centre in Munster, and runs to the end of this year. A special organization has been set up in Munster for the Puma, which provides mechanized infantry companies with three months of initial training in the new vehicle. The organization takes delivery of the vehicles from the manufacturer, outfits them with Bundeswehr-specific equipment and transfers them to the troops undergoing training there. Once they have completed the three-month course, the units return to their home base with their newly issued Pumas.

In the meantime, the Bundeswehr and PSM GmbH have concluded the necessary contracts for maintenance and technical/logistical support. Long-term support for the new infantry fighting vehicle from relevant German defence contractors is thus assured.

Continuity and change: Rheinmetall presents the HX3, a new generation of tactical trucks