Charting a course for the future 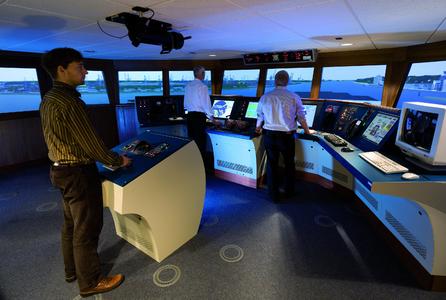 (PresseBox) ( Düsseldorf, 08-11-14 )
Oceans cover 71% of the earth's surface. Today, around two-thirds of the world's population live in coastal zones. Nearly 95% of global long-distance freight is shipped by sea. Each year, around 3.5 billion tons of cargo and some 350 million passengers pass through European ports alone. Globalization is nowhere so apparent as on the world's seas and oceans.

The sea divides and the sea unites. In today's globalized world, ocean-going commerce is the lifeblood of the advanced economies. This makes effective, futureoriented R&D and training in shipbuilding, maritime and nautical technology just as important as having efficient modern ports and shipyards.

As a leading supplier of simulator systems, Rheinmetall has set itself the goal of supporting the maritime society with solutions that will enable mankind to master the challenges of tomorrow. As a token of the company's commitment, Rheinmetall transferred a second "ANS 5000 professional" nautical simulator to Bremen's University of Applied Sciences on 14 November 2008.

The transfer marks a continuation of the close ties between Rheinmetall and the University, which enjoys a global reputation as a centre of excellence for shipbuilding, maritime and nautical technology. The University's first "ANS 5000 professional" simulator was installed in 2004.

This flexible system can both simulate and or stimulate a variety of different engine types, control devices, navigation and communication systems. Users can practise operating on the open sea, in coastal areas and canals, whether free of pilot or with articulated tugs, and under virtually any nautical condition imaginable.

State-of-the-art computer-generated imagery simulates the external view from the bridge. The horizontal field of view spans 270 degrees, and can be modified to encompass 360 degrees.

The system realistically simulates sensors and navigation instruments such as GPS/DGPS, Loran-C, Echo Sounder and Doppler Speed Log, which are linked to the monitor. Other highlights are the presence of real bridge components such as a NACOS system from SAM Electronics, whose radar, ECDIS electronic charts and Automatic Identification System (AIS) make it virtually indistinguishable from the real thing.

A further significant advantage of the second system is that it can be operated in tandem with the system the University already employs. In this configuration, each simulator operates its own ship in a joint scenario, with each ship influencing the other, enabling highly sophisticated operations to be performed.

Simulated manoeuvres are intensively observed and evaluated. The trainer is able to monitor and graphically depict all of the simulation data. It can introduce environmental factors, control other ships and cause malfunctions to occur in the trainee's ship. Every manoeuvre is recorded and can be called up on a large-screen display for subsequent post-operation analysis and debriefing.

However the simulator does more than provide intensive, high-quality training for maritime professionals. It can also be used for instructing pilots, carrying out research projects and preparing expert reports - such as investigating the feasibility of planned port facilities before a single spade is turned.

With the Ship Handling Simulator "ANS 5000 professional", Rheinmetall and the University of Applied Sciences in Bremen play a significant role in teaching the ropes to Germany's next generation of merchant marines as well as helping to secure the future of German shipping industry in general.

Recommend Charting a course for the future press release