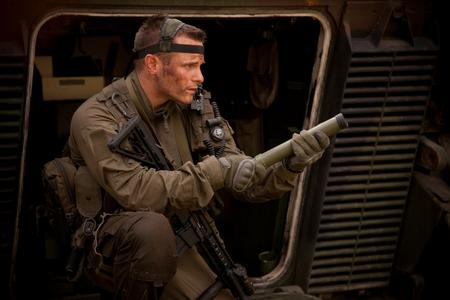 (PresseBox) ( Düsseldorf, 15-10-06 )
The Czech military has placed a major order with Rheinmetall for the handheld Mithras illumination rocket. Through to November 2015, the Düsseldorf, Germany-based defence contractor will supply the tried-and-tested Czech armed forces with an initial shipment of tens of thousands of Mithras rockets. The order is worth around €720,000. In strategic terms, it is important because the Czech Republic is one of a growing number of NATO nations to choose this innovative illumination rocket. Follow-up orders from the Czech armed forces are considered likely.

In the military realm, Mithras is used for signalling and battlefield illumination. It is designed for ranges of 300, 600 and 1,000 metres. A wide variety of payloads are available, including starburst flares, coloured smoke, instant smoke/obscurant for signalling or parachute cartridges for visible or infrared illumination, assuring maximum operational flexibility.

Mithras is a self-contained system fired without a flare pistol or other launch device. It features a triply secured, rotatable arming mechanism, assuring safe handling in accordance with STANAG 4497, which can also be returned to safe. Other outstanding features include low recoil in combination with a negligible smoke signature as well as spin and surface stabilization for low wind sensitivity. Every variant of the handheld Mithras rocket family is equipped with the same fuse system, differing only with regard to payload.

Largely produced at Rheinmetall’s Silberhütte plant in Saxony-Anhalt – a centre of pyrotechnic excellence for 225 years – Mithras illumination rockets have not only been fully qualified by the British and French procurement authorities, but also meet Germany’s stringent qualification standards.

Mithras is already in the inventories of the armed forces of Britain and France and has found customers in Scandinavia as well. The recently booked order from the Czech Republic confirms once again the compelling concept of Rheinmetall’s family of innovative handheld rockets.