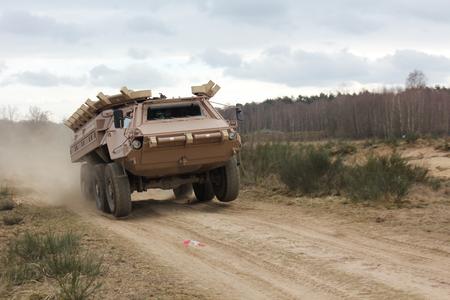 (PresseBox) ( Düsseldorf, 11-06-29 )
The German Bundeswehr is currently testing the newly developed standoff Active Defence System (ADS), which has already undergone successful road tests at the WTD 41 test center in Trier. In order to thoroughly analyse how the system functions as well as its operational effectiveness, the ADS has been installed into a Fuchs/Fox armoured transport vehicle for testing purposes. The Active Defence System is designed to provide practically any standard military vehicle - not just Bundeswehr systems - with significantly improved protection from operational threats.

The ADS belongs to a new generation of active standoff protection technologies. It is the world's most advanced and effective system for protecting military vehicles in practically all weight classes from modern operational threats, especially rocket propelled grenades, guided missiles and certain improvised explosive devices.

Adhering to the hard-kill principle, ADS is the world's only system that is capable of preventing attacks launched in the immediate vicinity of the vehicle, i.e. in a radius of approximately 10-15 metres. Sensors detect an incoming threat such as a shaped charge warhead or antitank guided missile very close to the vehicle. Within microseconds, the system springs into action, instantly destroying the incoming threat just before it hits its intended target. The downward direction of the ADS makes it the only high-performance, close-range protective system that minimizes collateral damage in the area around the vehicle.

Successful integration by Rheinmetall and ADS GmbH of an ADS system into a Fuchs/Fox armoured transport vehicle demonstrates that legacy vehicles can be modified for current operational scenarios. First fielded by the German armed forces some thirty years ago, Rheinmetall has steadily improved the protection level and combat effectiveness of this tried-and-tested three-axle wheeled vehicle by adding modular protection equipment, a reinforced chassis or an anti-spall liner for reducing the threat from fragments. The latest version, the Fuchs/Fox 1A8, also features extensive anti-landmine and IED protection, including heavy armour elements, seating decoupled from the floor of the hull, textile weapon holders as well as nets for securing all wall-mounted components. ADS technology offers active protection against antitank weapons for the first time.

The company ADS Gesellschaft für aktive Schutzsysteme mbH, in which majority shareholder Rheinmetall AG of Düsseldorf holds a 74% stake, with the remainder owned by IBD GmbH of Lohmar, has now booked a first serial production order for the system.

Other NATO armies are currently showing great interest in ADS technology. Experts put the number of military vehicles requiring an active protection system of this type in the tens of thousands.

It takes a well-balanced combination of active and passive protection solutions and soft-kill solutions to provide military vehicles with a level of security commensurate with contemporary threats.

Rheinmetall has thus been expanding its force protection portfolio step by step, partly by buying specialist producers. Able to draw on the expertise of Rheinmetall Chempro GmbH, Rheinmetall Verseidag Ballistic Protection GmbH and ADS Gesellschaft für aktive Schutzsysteme mbH, the Group now has a unique array of sophisticated protection technologies at its disposal.

Protection in line with the "onion principle"

Rheinmetall's comprehensive protection concept is based on a multi-level approach. ADS - effectively serving as the first line of defence - offers an especially robust and innovative solution that neutralizes incoming projectiles before they reach their target.

However, a second line of defence consisting of passive solutions remains indispensable, including armour plates made of composite or ceramics materials. Rheinmetall is pushing forward in this field with complete solutions for military users from a single source, including bullet-resistant driver's cabs for logistical vehicles and trucks.

A series of highly effective soft-kill solutions rounds out the Group's protection concept not only for ground vehicles but also for helicopters, fixed-wing aircraft and ships. Smoke/obscurant systems such as "Rosy" make vehicles invisible to the enemy in the event of an attack, while Rheinmetall's MASS naval countermeasures system already sets the standard worldwide. MASS launches decoys to create phantom targets for enemy missiles that reliably lure projectiles away from their actual targets.

Oft als widerstreitende Ziele betrachtet, lassen sich Produktivität und Sicherheit unter einen Hut bringen. Unser Fachbeitrag zeigt, wie „Zero Trust“ die Anforderungen von Digitalisierung und neuen Normalitäten meistert – ohne Unternehmen auszubremsen. read more
The publisher indicated in each case is solely responsible for the press releases above, the event or job offer displayed, and the image and sound material used (see company info when clicking on image/message title or company info right column). As a rule, the publisher is also the author of the press releases and the attached image, sound and information material.
The use of information published here for personal information and editorial processing is generally free of charge. Please clarify any copyright issues with the stated publisher before further use. In the event of publication, please send a specimen copy to service@pressebox.de.