New MCUs Feature an On-Chip PDC Module that can be Directly Connected to a CMOS Image Sensor, Contributing to Significant Reductions in System Costs and Time-to-Market 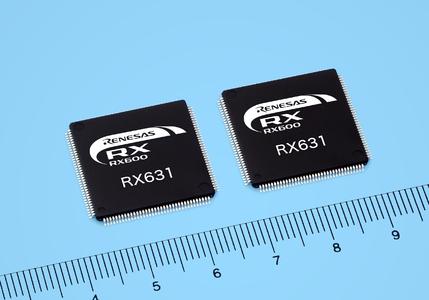 (PresseBox) ( Düsseldorf, 13-10-08 )
Renesas Electronics today announced the expansion of its RX631 Group in the RX600 Series of 32-bit microcontrollers (MCUs) with the introduction of 15 new devices for commercial and building automation applications. The 15 new MCUs feature a built-in PDC (parallel data capture unit) that also allows the direct connection of a CMOS camera module, making it easy and cost effective to build application with image capture.

Additionally, the new MCUs can access internal Flash with no wait states even at 100 megahertz (MHz) operation and thus achieve the high performance of 165 DMIPS (Dhrystone MIPS). The new MCUs also include a rich set of built-in peripheral functions, including USB 2.0 full-speed (host, function, and on-the-go), CAN, I²C bus, and multifunction 8/16-bit timer modules, allowing system manufacturers to easily implement, at low cost, CMOS camera functionality in home appliances, vending machines, and simplified security cameras for home use. This rich set of peripheral functions also enables these devices to be used in a wide range of applications in addition to those that require camera functionality.

Due to the lower cost of CMOS image sensors, camera functionality is now being included more frequently in industrial and consumer applications, such as bar code and 2D scanners, access control and alarm systems , that previously did not include a camera.

However, the traditional solution to implement a camera interface in a system is to use a microprocessor with large external RAM. This comes with a cost premium and increases the complexity of the design. These microprocessor devices are high-end, high-functionality microprocessors that include, among other functions, an image processing engine for JPEG encoding and hardware support for Open GL for graphics, and need external memory and components that add cost to the system. As it is common for those microprocessors to not include system functions, such as ultra-low-power operation, power-on reset (POR), low-voltage detection (LVD), and on-chip oscillator (OCO), required for industrial and consumer systems, it is difficult for users to implement both the user's existing system control and camera functionality with a single controller.

Since the system costs that are allowable for products such as home appliances are limited, it is difficult to newly add a high-functionality high-priced microprocessor and the associated peripheral components to an existing system.

Furthermore, since it is common for microprocessors to not include functions, such as ultralow power operation, power-on reset (POR), low-voltage detection (LVD), and on-chip OCO functions, required for home appliance system control, it is difficult for users to implement both the user's existing system control and camera functionality with a single microcontroller.

To resolve this issue, Renesas has developed new MCUs that achieve both these functions - existing system control and camera functionality - in a single chip, providing a cost effective and simple way to add camera support in industrial and consumer applications.

Key features of the RX631 Group of MCUs with Built-In PDC:

The newly-developed RX631 Group of MCUs brings the camera functionality in the RX family of 32bit general purpose MCU. By providing not only the standard peripheral functions, such as Timers, ADC, SCI, I2C, USB, reset and OCO functions, but also a PDC module and a powerful 32-bit RX CPU core with embedded flash and RAM that achieves the high performance of 165 DMIPS at 100 MHz, they can reduce system costs for adding camera functionality by approximately 30 percent when compared to the equivalent microprocessor solution.

As part of the RX family of products, the new RX631 group benefits from the wide ecosystem of mature development tools and software existing for RX MCUs, for example the Renesas e2 studio Eclipse-based IDE. Developers for industrial and customer applications can develop their regular systems with RX microcontrollers, and add the camera interface using the same tools and software, accelerating the time to market for offering an image sensor solution.

Since a high-performance, high-functionality microprocessor is usually used when implementing CMOS camera functionality, there is a tendency for power consumption to increase. This often requires the existing system's power supply system to be redesigned. The new RX631 MCUs have a maximum current drain of 100 mA/100 MHz during normal operation, resulting in approximately 50 percent savings when compared to using a microprocessor, according to Renesas analysis. Thus, these products contribute to system energy savings at low cost.

Refer to the separate sheet for the main specifications of the RX631 Group of MCUs with built-in PDC.

The new Renesas RX631 Group of MCUs include 128 kilobyte (KB) of on-chip RAM and include three variations of on-chip flash - 256, 384, or 512 KB. Samples of the RX631 Group of MCUs with built-in PDC are available starting end of October 2013. Mass production is scheduled to begin in December 2013 (Availability is subject to change without notice.)

Remarks
Other product and service names that appear in this press release are trademarks or registered trademarks of their respective owners.

Renesas' products are the result of decades of research and investment into semiconductor technology and customer solutions. Today, they provide pioneering platforms for the advancement of the Smart Society, embedding intelligence, connectivity, safety and security in solutions for cars, homes, buildings and factories. In Europe, Renesas complements its cutting-edge technology with resources that foster customer proximity and span the entire product lifecycle. These include the European Technology Centre, which designs innovative solutions specifically for Europe, and the European Quality Centre in Düsseldorf, which provides technical support to customers throughout the region. Renesas also operates an effective ecosystem, comprising the industry's largest local support network and an extensive network of over 800 hardware and software alliance partners.

Headquartered in Japan, Renesas Electronics has subsidiaries in 20 countries worldwide. More information is available at www.renesas.eu.