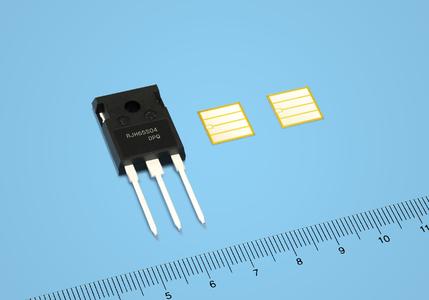 Renesas IGBTs are suitable in motor controls applications. In such cases the device short circuit capability is a design critical selection parameter. The 7th-generation IGBT series comes with a 10 µs rated short circuit tolerance making it suitable for motors in general.

Recently, concerns for environmental preservation and other factors have prompted the need to improve the energy efficiency of electrical equipment as well as an ongoing shift toward clean energy such as solar and wind power. Such efforts to boost energy efficiency have been vigorous in the area of equipment that handles high voltages and large currents, such as solar inverters, water-jet pumps, and large-current inverter-controlled motors. This has spurred demand for dramatically reduced loss in IGBT products used in the conversion of power from DC to AC for this type of equipment. However, there is a trade-off between saturation voltage (Note 1), which is key to reducing loss, and the high short circuit tolerance required in the equipment that handles large currents. It has been difficult to achieve low loss along with a high short circuit tolerance (Note 2) of around 10 microseconds, which is considered essential in applications such as motor drives. In response, Renesas has developed these high performance IGBTs.

Key Features of the new IGBTs:

The exclusive ultrathin wafer technology reduced the saturation voltage to 1.6 V (typical value) from the 1.8 V (typical value) of comparable earlier Renesas products for the 650 V versions and to 1.8 V from 2.1 V for the 1250 V versions, a drop of about 12 percent and 15 percent in each case. This reduces power loss and contributes to increased efficiency.

The high short circuit tolerance, essential in applications that handle large currents, has been improved from the 8 microseconds (μs) range of comparable earlier Renesas products to 10 μs or above by optimized cell structure technology. This ensures excellent reliability and robust performance in systems such as power conditioners for solar power inverters.

The reverse transfer capacitance (Cres) (Note 3) has been lowered by approximately 10 percent compared with earlier Renesas products by optimizing the surface structure of the device. This contributes to faster switching and makes it possible to build more efficient power converter circuits.

These improvements contribute to lower power loss and more stable operation in applications such as the three-phase inverter circuits widely used in large-current inverter blocks of solar power inverters or inverter-controlled motors for industrial use.

Renesas benefits customers by offering total solutions combining microcontrollers (MCUs) with analog and power devices. The new high-performance 7th-generation IGBT products take their place among the best power devices in the world in their category. They form the core of the Renesas lineup of power devices, and the company plans to release new products in the series moving forward.

Renesas also plans to release an enhanced line of kit solutions consisting of the new IGBT products with Renesas' RL78 and RX families of MCUs for motor and inverter control and photocouplers for power device drive, among other combinations. Renesas is also preparing reference boards mounted with the new IGBT products to support customers' kit evaluation and system design.

Shipping formats for the new IGBT products are wafer/chip and TO-247A package for the RJH65S series.

This is the most important index of the performance of an IGBT. It indicates the collector-emitter voltage drop when the device is conducting current. The lower the value, the smaller the conduction loss.

An index of an IGBT's ability to withstand destruction. It indicates the amount of time before the IGBT is destroyed by unlimited current flow due to a short circuit. Generally speaking, a high value is desirable for applications demanding large current handling and high reliability, such as motor drives.

A parameter indicating the intrinsic capacitance between the gate and collector of the IGBT. Generally speaking, a smaller value mean faster switching of the device is possible, resulting in reduced switching losses.

Refer to the separate sheet for the main specifications of the IGBT series.

Remarks
All other registered trademarks or trademarks are the property of their respective owners.

Renesas Electronics Europe with its Business Operations Centre located in Dusseldorf, Germany, is a wholly owned subsidiary of Renesas Electronics Corporation (TSE: 6723), the world's number one supplier of microcontrollers and a premier supplier of advanced semiconductor solutions including microcontrollers, SoC solutions, secure MCU applications and a broad-range of analog and power devices. Renesas Electronics' European structure is comprised of three dedicated business groups serving the region's key markets: automotive, communications & consumer and industrial. The business groups are supported by the Engineering Group, which itself includes the Engineering Design Centre; the European Quality Centre that provides technical support to local customers in Europe; and the European Technology Centre to design leading-edge products specifically for the European market. Further information about Renesas Electronics Europe can be found at: www.renesas.eu.

Mit „Truscale Infrastructure Services“ bietet Lenovo sein „Thinksystem“- und „Thinkagile“- Produktportfolio in einem innovativen as-a-Service-Nutzungsmodell an. Hardware im Abonnement gefällig? Warum eigentlich nicht. read more
The publisher indicated in each case is solely responsible for the press releases above, the event or job offer displayed, and the image and sound material used (see company info when clicking on image/message title or company info right column). As a rule, the publisher is also the author of the press releases and the attached image, sound and information material.
The use of information published here for personal information and editorial processing is generally free of charge. Please clarify any copyright issues with the stated publisher before further use. In the event of publication, please send a specimen copy to service@pressebox.de.