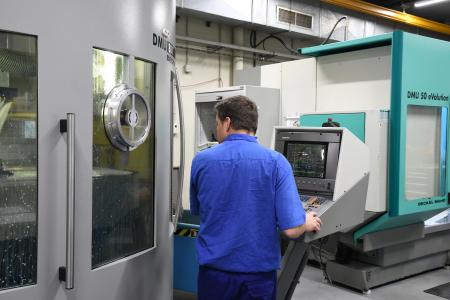 (PresseBox) ( Tenniken, 20-08-24 )
As a system supplier for the lighting and household appliance industries based in Germany, BJB operates globally in the markets for light fixture manufacturing, household appliance lighting and automation. Its subsidiary BJB Procesa in Lliçà de Vall, Spain, is responsible for manufacturing smaller molds and tools, among other things. Here, near Barcelona, they’ve been working with REGO-FIX powRgrip toolholders for years.

It all began in Arnsberg, Germany, where the BJB headquarters are located. BJB has been manufacturing lighting technology since 1867. The Arnsberg company initially manufactured entire petroleum lamps, before focusing on accessory parts. As electricity became more and more widespread, BJB gradually developed electric “Bridges to Light”: initially light bulb bases and then – as a result of standardization – the corresponding lamp sockets. First it was incandescent lamps and then later fluorescent, halogen and a variety of discharge lamps. LED lights represented another technical revolution at the turn of the century, their forms and low heat dissipation enabling all-new concepts and designs in general lighting. Once again, the markets – and with them BJB – were forced to rethink their strategies, ultimately developing technical solutions for connecting and securing circuit boards and COB modules. BJB’s LED modules and accessory kits now enable a variety of OEMs to manufacture individual solutions using electrical, mechanical, and optical components. 500 million technical products for light and lighting are thus produced in a large vertical range of manufacture every year: from the initial idea to the finished product, the company covers the entire value chain. As the primary process, production encompasses plastic injection molding including tool manufacturing, metal working, and assembly through to circuit board production with automatic feed, screen printer, reflow oven, and inspection technology.

Based in Lliçà de Vall, BJB Procesa was initially founded as a dedicated service location in 1977, but quickly developed into the production site for tools and molds. Procesa then went on to operate exclusively as a supplier for the German parent company for 20 years. For some time now, the 25 employees have also been accepting orders from third parties and, in addition to producing tools and molds, also manufacture devices and carry out repairs. The subsidiary’s primary markets are now Spain, Portugal, and North Africa.

BJB Procesa carries out its machining with three five-axis milling machines. When it comes to this and other technologies such as eroding, the tool manufacturer usually invests in German or Swiss products, just recently acquiring an eroding machine by Agie Charmilles. With these preferences, they work with Ingersoll for wire eroding and with JUNG and HAUSER for flat and jig grinding. The workpiece materials primarily used on these machines are hardened and unhardened 1.2379 for most applications and unhardened 1.2842 cold-work tool steel for reduced requirements, complemented by 1.2312 for larger molds and 1.1730 for plates. Components such as die plates and rods are frequently made from carbide, with weights up to 1,000 kg. Everything with machining tolerances of up to ten micrometers is no problem for BJB Procesa. But because not all competitors can boast the same, separating the wheat from the chaff, there’s a market for new applications for the tool and mold manufacturer. The fact that they can distinguish themselves from the competition when it comes to stringent tolerance ranges and tap into the market is due in large part to their use of REGO-FIX powRgrip toolholders.

Trust Is the Key

BJB Procesa’s contact for REGO-FIX products is the GerSwiss company, which is a dealer of tools and tool/workpiece clamping technology and represents exclusively German and Swiss manufacturers in Spain. “Our strategy is to minimize the number of our suppliers,” says Enric Jorda, BJB Head of Production, describing one of the conditions of collaboration. “For us it all comes down to trust. At the same time, we expect the solution to be productive, which we consistently compare with the costs.” The reason for that, he explains, is the fact that BJB doesn’t manufacture any series and doesn’t test every workpiece or tool. “We monitor the general costs and want to manufacture the best we can under the most economical conditions,” says Jorda. In this constellation, it’s crucial for him that the partners speak directly to his machine operators and optimize applications with them. “GerSwiss is a prime example of what we expect of our partners: ongoing improvement of the knowledge of our machine operators and continuous provision of solutions.” This approach now oversees the entire tool launch between the machine operators and GerSwiss. “Together we then try to maintain peak performance with all of the tools and holders,” says Oscar Velilla, CEO of GerSwiss. “At the same time, we monitor tool use via a tool management system and ensure optimal planning at all times.” GerSwiss supplies tools and clamping technology for the entire material and technology industry – for milling, drilling, and turning as well as for tapping and grinding.

The use of REGO-FIX powRgrip toolholders also stems from this approach. “Originally, we only worked with colletholders and Weldon chucks,” says Jorda. “We were never impressed with the shrinking because the wear worsens gradually and uncontrollably and because employees are exposed to the risk of burning when using them. We were much more impressed with the mechanical powRgrip system from the very beginning.” The system was introduced at the same time as the collet and Weldon holders nine years ago. “At that time, we had to mill hardened parts with small tool diameters more frequently,” says the Head of Production. “The wear on colletholders is, of course, very high here. And precision and concentricity are especially important when it comes to small tool diameters. So, we had to invest.” According to Jorda, there’s another reason why they used powRgrip rather than shrinking: “The system is very simple to use.” This is all the more important for BJB Procesa because all of the employees prepare their tools themselves.

Today, nine years later, one thing is clear: powRgrip was the right choice, reliably covering the tool manufacturer’s range of parts. Procesa now uses REGO-FIX holders for 70 percent of its applications. All tools with a standardized shank are clamped with powRgrip. Tools are only clamped differently if, for example, intermediate sizes are required for core drilling or tapping or if carbide drills with reinforced shank are used.

The spectrum of applications for collets currently ranges from PG 10 and PG 15 to PG 25. When it comes to solid carbide, cutters with diameters between 0.2 and 25.4 mm can thus be accommodated, as can insert tools with diameters up to 40 mm. The usual spectrum in drilling ranges from 1.5 to 25 mm, while threads are produced with tools featuring a shank diameter of up to 16 mm, whether it’s in HSS or – if the workpiece material is hardened – in solid carbide. Of course, the shortest toolholders possible are used. But due to BJB Procesa’s range of parts, PG S models with an especially short shank are currently in less demand, as are PG L collets with a long shank and the secuRgrip locking solution for especially high extraction security. BJB Procesa uses an automatic PGU 9500 clamping unit, which fixes collets with 90 kN in the holder. The tool shank is securely centered over the slotted collet, thus guaranteeing concentricity accuracy of 0.003 mm.

There’s not a doubt in Jorda’s mind: “Investing in a long-lasting product was absolutely the right decision. We’ve been using powRgrip for nine years now and haven’t had a single problem in all that time. The system is fast and easy to use and requires virtually no replacement investment. The only additional costs come from expanding the powRgrip application.” The system costs are thus more than appropriate. In fact, the Head of Production would even go so far as to say that the value for money is the only right option for achieving his goals: precision and quality. “We’ve never had to make a part over again because a tool had somehow behaved critically in the holders.”