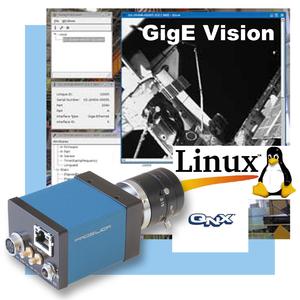 Prosilica’s Linux SDK for GigE Vision works on both x86 and PowerPC hardware which is of great interest to system integrators and equipment manufacturers who want to use low-cost computer platforms for their automated imaging systems.

“Prosilica’s customers love our Windows SDK for GigE Vision and will be excited about our new Linux SDK for GigE Vision” says Marty Furse, Prosilica CEO. “Since our Linux SDK runs on both Intel x86 and PowerPC platforms, customers now have greater ability to run our gigabit Ethernet cameras on low-cost, very small, SBC computers for embedded and OEM applications.”

Prosilica’s Gigabit Ethernet cameras are high-performance machine vision cameras that output uncompressed image data to a host computer, often at very high data rates, for image processing. Data is received through the gigabit Ethernet port of the host computer so there is no need to use a frame grabber. Prosilica’s wide range of GigE Vision-compliant gigabit Ethernet cameras range from VGA at 200 frames per second up to 4-megapixel resolution running 15 frames per second. Cameras are available with either CCD or CMOS sensors either monochrome or color with a variety of output formats including RGB.