search for a seafloor imaging system 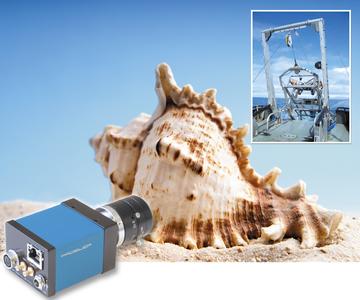 (PresseBox) ( München, 09-03-29 )
With seafood exports totaling $2 billion in 2006 and accounting for half of Alaska’s total export value, the fishing industry is Alaska’s largest employer and one of the State’s main economical resources. One of the main roles of the Alaska Department of Fish and Game (ADF&G) is to ensure sustainability and harvestable surplus of fish and wildlife resources for the 49th State.

The search for a seafloor imaging system
The ADF&G began experimenting with underwater video technology for scallop stock assessment in 1999. The prototype system consisted of a sled, which held a camcorder in a pressurized housing and battery powered lights towed from a surface vessel. The system proved to be insufficient in three ways:

The ADF&G contacted Prosilica in January 2006 who recommneded its GE1380C GigE Vision camera. The GE1380C is a compact 1.4 megapixel digital camera with color output that incorporates the high quality Sony ICX285 CCD sensor providing highsensitivity, low noise, and excellent image quality even when operating under low-light conditions at depths of 40-140m. The camera runs up to 20 frames per seconds at full resolution and is capable of streaming data at a sustained rate of 125 megabytes per second. Its gigabit Ethernet interface is virtually plug-and play and allows for cabling with lengths of up to 100m using conventional Cat5e network cable, or up to several kilometres using fiber-optic cables.

System set-up and tests
The system developed by the ADF&G (see figure 1) consists of a tow vessel and a camera sled. It is basically a Local Area Network (LAN) featuring 2 Gigabit Ethernet switches connected by a fiber optic link, one mounted in a pressure housing on the sled and the other one located with computers in a deck shelter on the tow vessel. Each network component (hard drive array, three computers, a serial device service, obstacle avoidance sonar, temperature sensor, pitch and roll sensor and the Prosilica GE1380C) connects to either switch via standard Cat-5e cabling.

Each switch is connected to a pair of bi-directional single mode fiber optic media converters to allow data transmission over distances of 2 kilometers and more. Three off-the-shelf PCs are connected to the top-side switch located on the vessel, one for remote control of the GE1380C camera and recording, and the other two to run the navigation software developed by the ADF&G programmers and to record GPS data and communicate with serial devices on the sled. The GE1380C camera, fitted with an 8 mm fixed focal length lens, was mounted in its own pressure housing on the sled and used to image through a domed glass port. Strobe lighting was used to ensure crisp images at towing speed of 5-8.5km/h under extreme low light conditions.

The system was first tested on board the Pandalus vessel in June 2006 and again in June 2007 using a larger and improved sled. Measuring 3.5m x 1.8m, the new sled makes contact with the bottom using two skis. In addition, four strobe lights mounted in individual pressure housing were placed around the camera to illuminate the area imaged ahead of the skis. During both cruises totaling a period of 12 days, 1.1 million images at depths of 40-140m were captured over a track of 550 km long. The GE1380C performed extremely well operating at 4 fps and tow speeds of 5-8.5km/h, providing resolution of over 1 pixel/mm, which enabled identification of objects smaller than 50mm in most water conditions.