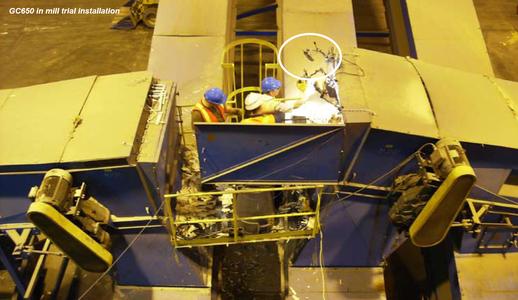 (PresseBox) ( München, 09-04-10 )
Canada is one of the world's pre-eminent manufacturers of high quality wood products and also the largest exporter of wood products. In addition, about 75% of Canada’s structural wood panel production (mostly OSB) is exported, primarily to the United States.

Forintek is a leading organization in wood products research based in Canada whose mission is to develop applications and solutions to maximize the competitiveness of the Canadian wood products sector. Forintek also conducts market and economic studies and plays a key role in the development of building codes and standards nationally and internationally.

Issues facing the wood industry
In the current manufacturing procedure for the housing industry, logs are processed to produce thin wood strands of a specific size range to maximize the final panel product properties. Because of a changing wood supply in some areas, mills have to process drier wood, such as MBP pine. Such pine generates high levels of small wood particles, also called “fines,” that make it more difficult to produce evenly sized strands needed for efficient processing and quality purposes.

It is estimated that drier wood produces small particles equivalent to 5-50% of the total volume, and that each 1% improvement in wood recovery through fines reduction could save mills between $250,000 to $300,000 a year depending on the location.


Set-up and improvements
In 2002, Forintek started developing an online fines measurement system following high level interest from the OSB industry. The original system consisted of 2 tungsten halogen lights and a monochrome analog 1/2” CCD camera linked to a vision computer analyzing the image data via a software programmed with C++. The system was pointing at the drop-chute of a continuous running closed loop conveyor system built to recreate mill conditions. Initial tests showed that the system needed improving. The following changes were made:

- Lighting:
The halogen lights, because of their short lifespan and heat generation were replaced with two LED lights set to pulse at high frequency in order to generate sufficient illumination for the
project.

- Machine Vision Camera:
The analog camera provided poor light sensitivity and was replaced with the Prosilica GC650 monochrome digital camera. The GC650 is a fast, VGA resolution camera with a GigE Vision compliant interface. The 1/3 " CCD progressive scan Sony ICX424 sensor provides excellent image quality and sensitivity. The GC650 was fitted with a 12mm lens and set to operate 4 feet away from the target at 1/1,000s exposure and 20 frames per second. In addition, technicians at Forintek used the 2x2 binning function that is part of every Prosilica CCD camera in order to further enhance image sensitivity. Binning is a function that increases camera sensitivity quite dramatically at the expense of resolution by combining pixels together to create fewer but larger pixels.

- Software: The software was reprogrammed in Lab View for further ease of use and added operational features.


Pilot plant testing
A closed-loop conveyor system made of two crisscrossed conveyors connected by drop chutes at both ends was specially built for the tests. The system was configured for two set-ups:

Set-up #2: The lights and camera are setup to measure the top of the furnish from 50cm above level.

During the tests, the conveyor was loaded with 5kg of furnish for each of the species (aspen, birch and MBP pine) with fines level ranging from 0-50% in 5% fines increment. To recreate mill conditions the belt travelled at a speed of 250ft/min. The cameras imaged at 10fps and 500 images were analyzed for each fines level on both set-ups.


Mill trial
The imaging system was then moved to the “Louisiana Pacific OSB” mill in Chambord, Québec for mill trials to measure fines content of green aspen furnish. The GC650 was mounted to view the conveyor belt through a hatch opening and set to image at 10fps over a period of 4 hours. Furnish samples were collected by staff at random intervals to determine the actual fines content.

Conclusions
During the test period, results showed the number of fines from the collected samples showed a good correlation with the imaging system measured results. Today, over 10 OSB mills in Canada, USA and Europe are using the online fines measurement system originally developed by Forintek. A patent has been filed for this technology.