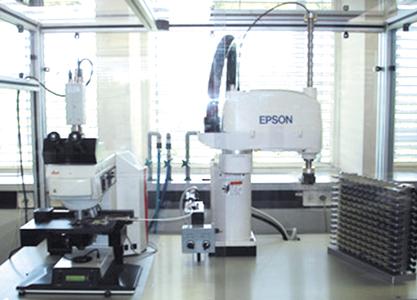 (PresseBox) ( München, 09-10-10 )
The drug discovery process not only develops new drugs that cure, control, or prevent disease. The process must include rigorous testing for severe side effects. This is particularly true for drugs that are intended for long-term or even lifetime use, such as anti-rejection drugs for transplant patients.

Long before human trials can proceed, drugs must be tested for their efficacy and safety. The Preclinical Safety unit at Novartis has the responsibility of determining adverse side effects of all new molecular entities (drugs) in vitro (i.e. in cultured cells) and in vivo (animal testing). Besides other toxicological studies, the researchers perform genetic toxicology assays (tests) to assess the genotoxic potential of new drug candidates. Drug effects on mammalian cells are studied, using chromosomal abnormalities (besides other cellular and nuclear endpoints) to assess the compound's potential hazards. When such abnormalities occur, it means that the drug in question has interacted with the cell's genome. Dr. Wilfried Frieauff, Laboratory Manager of the Preclinical Safety unit at Novartis in Basel, Switzerland, says that when a statistically and biologically significant increase in these events are observed, there's a potential for the drug candidate to induce cancer.

Frieauff manages the labs, and he is responsible for the Image Analysis Platform - it's development, system maintenance, and support. The Preclinical Safety unit runs hundreds of tests annually on literally millions of cells. Given the numbers, it's no surprise that the analysis process is one that benefits from automation.

At the end of the 1980s, Frieauff's lab began to use Leitz MIAS image analyzers for that purpose. But by the late 1990s, Dr. Frieauff realized that the systems were seriously outdated. "It was a stand-alone system that could not be part of a network. Replacement parts were no longer available." he explains. These early image analysis systems had a maximum capacity of processing only 16 slides in a row. "Sometimes we would load the slides on Friday, and the system would finish and sit idling until Monday morning." More importantly, Frieauff expected the future would bring more image analysis development projects and he "realized that it was time to totally re-engineer and modernize our image analysis."

After extensive research of the market, Frieauff selected several components that would comprise the new ROBIAS, the Robotic Image Analysis System. ROBIAS is built from an electronically-driven Leica DM RXA/2 microscope mounted with a SONY DXC-390 color CCD camera that is connected to host PC with a Matrox Meteor-II /MC frame grabber. An optional robotic slide feeder can automatically place up to 130 slides on the microscope's stage for processing, which is performed by using custom-developed image analysis algorithms based on the Matrox Imaging Library.

Automated microscopy
Due to the subjective nature of manual microscopy and the increasing need for accurate, standardized results, image processing techniques have been used in microscopy for some time. Indeed, medical diagnostic and pharmaceutical applications need precise results - lives are at stake - and automated microscopy offers complete objectivity (thanks to image processing algorithms) and relieves the human eye of difficult and fatiguing tasks.

By studying the cells' DNA, the researchers can add evidence to a drug's relative safety, or identify potential hazards. For the micronucleus test or the chromosome aberration analysis, the researchers look for chromosomal abnormalities which become visible when the cell passes through mitosis. As an example, a micronucleus, being a chromosomal part originating from a chromosome strand break due to the compound interaction with the nuclear material, reflects a genotoxic insult. Direct DNA lesions are assessed using the comet assay where DNA particles migrating in an electric field, are stained with a fluorescent dye and can be measured to assess the overall DNA damage following the compound administration.

Summarizing genetic toxicology's mission, if the drug does not damage a cell's DNA, an important hurdle is passed for being a good candidate for later Phase 1 clinical trials.

M is for morphology
MIL markedly supports the researchers to extract the vital information they seek. After "discovering" MIL in 1999, Frieauff found that it was "the most flexible and ready-to-use tool library which fully supported mathematical morphology functions, as well as advanced blob analysis, both very important for biological image analysis." These functions comprise the "core" of Frieauff's software. With more than 20 years of experience in image analysis development, Frieauff had already built some powerful software tools based on low-level imaging functions. MIL's functional interface simplified the overall software development. "For my applications," he explains, "automated segmentation of biological structures, that is, cells containing nuclei or other cellular patterns, is crucial. Thus, I developed automated segmentation functions for various specific applications in industrial toxicology."

The "various specific applications" of which Frieauff speaks is one of the unique features of ROBIAS. "You may find diverse systems covering individual solutions," he says, "but not one system covering all these tox[ological] assays on one platform. That was the main idea behind ROBIAS."

Currently, five ROBIAS units are deployed in Novartis locations, plus an additional two systems without the robotic slide feeder. These days Frieauff manages the laboratory's toxicology assays and oversees all aspects of ROBIAS. Always in the midst of new application development, he is currently investigating sophisticated details of the MIL's Edge Finder module. He is also working through the process of patenting ROBIAS. His determination has certainly paid off. In fact, in 2007 Frieauff received the Novartis VIVA Leading Scientist award. "I was extremely proud," recalls Frieauff, "the award reflects the importance of the ROBIAS system and the development of fully automatic image analysis applications for various units within Novartis Pharma research and development."