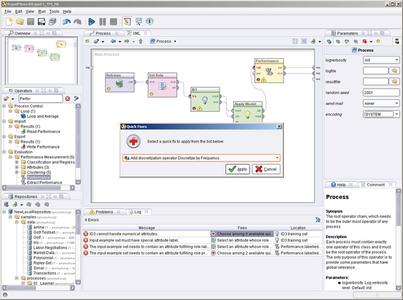 (PresseBox) ( Dortmund, 09-10-05 )
Finally, Rapid-I presents the new version of the world-wide most often used open source data mining solution RapidMiner. Among the new features of RapidMiner 5 are a new user interface, the new repositories, a completely new way of meta data transformation, and the quick fixes, which simplifies the design of complex analysis processes a lot.

The management of your data and processes is very easy with RapidMiner 5. Rapid-I wants to ease the first steps into data mining especially for less experienced data analysts.

The new repositories structure your data mining projects and serve as the major source of the data to be analyzed. A simple drag and drop of data into one of your repositories automatically starts a matching input wizard and allows data integration within a few mouse clicks only. Additionally to your data, also describing meta data is stored within the repositories. You can access this meta data during process design and it will be transformed in the new flow design of RapidMiner 5. This allows the recognition of possible errors in analysis design as early as possible.
RapidMiner 5 provides a new flow design additional to the tradition operator tree known from previous versions. The flow design of RapidMiner 5 makes this data flow explicit: operators have input ports and output ports which can be connected to each other in an arbitrary fashion. The new flow layout significantly eases process design, inserting operators at the beginning will not mess up the objects at later stages. At every stage it is perfectly clear which object ends up where.
The meta data from the repositories are automatically transformed in the new flow design of RapidMiner 5. The meta data transformation allows to describe the expected results already during design time. Moreover, the meta data transformation of RapidMiner 5 guarantees exceptionally efficient work flows. Connections in the new flow design, for example, are automatically created as far as possible. The results of a process can also be stored in repositories and be easily re-used in other processes.

Repositories, flow design and meta data transformation are the core components of the new RapidMiner 5. The continuous verification of the analysis process already during design time supports less experienced data analysts and offers experienced analysts hints for the optimization of their processes. If RapidMiner 5 detects a problem in process design, the problem is not only described but the user can choose among possible solutions presented as quick fixes. An error in process design is hence resolved within a few clicks.

The visualization of analysis results was further optimized as well. For the first time, several results can be simultaneously inspected in RapidMiner 5. Furthermore, the new result overview offers a quick summary of the results achieved so far.
About RapidMiner:


RapidMiner
[ www.RapidMiner.com ] is the leading open source data mining software. According to polls of the major web portal for data mining and knowledge discovery, KDnuggets.com, in 2007, 2008, and 2009, RapidMiner is the most widely used open source data mining tool and the second most frequently employed software for data analysis overall. A study of the Technical University of Chemnitz presented at the international Data-Mining-Cup 2007 (DMC-2007) compared the major open source data mining tools and found RapidMiner to be the leading open source data mining software outperforming the others especially with respect to its advanced technology and to its usability. Within its "Innovation Award 2008", the German initiative for small and mid-sized businesses ("Initiative Mittelstand") awarded RapidMiner as one of the most innovative open source solutions. For its innovativeness, RapidMiner also won the Open Source Business Award 2008. RapidMiner has thousands of users in more than 40 countries world-wide. During the last three years, RapidMiner was downloaded more than 400,000 times. RapidMiner provides more than 500 different modules for detecting patterns in data and for their 2D and 3D visualisation. RapidMiner supports data import from common data formats of other data mining tools, Excel sheets, SPSS files, all common databases, and unstructured text documents like news texts, e-mail messages, web pages, web blogs, PDF documents, as well as time series and audio data. The RapidMiner Enterprise Edition supports the complete process from data integration and transformation (ETL) to predictive analytics, data mining, and reporting within a single solution. RapidMiner offers a high flexibility in the design of analysis processes and is regarded as the most comprehensive solution for automated data integration, data analysis, predictive analytics, data mining, text mining, web mining, opinion mining, and sentiment analysis in the market.