Wind Industry in the Crosshairs

Review of the Wind Energy Conference in Poland 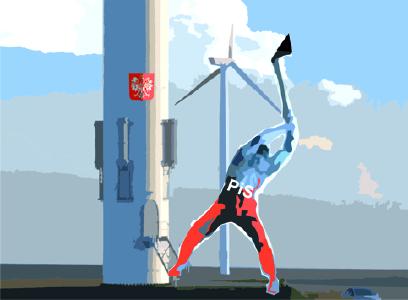 (PresseBox) ( Gelsenkirchen, 16-03-16 )
"Being active in the international wind energy business for twenty years, means knowing the trials and tribulations of changing legislations - but what's going on here in Poland right now, is unique!" Joachim Binotsch, CEO of the engineering consultancy BBB Umwelttechnik GmbH, is stunned after the information meeting on the proposed changes on the eve of the wind conference in Warsaw (PWEA).

Only last year Polish wind industry seemed to get on track: a renewable energy law had been passed that aimed at the implementation of an auction system in 2016. "Better to have a law which provides a fixed frame, than to have no law at all," says Binotsch "we can handle that." This could have been the beginning of the utilisation of Poland’s great wind energy potential, if the ultra-conservative PiS had not come to power in the meantime.

The new government’s energy policy consists of exploiting domestic coal and building up new nuclear power plants. Once in office, PiS launched a campaign against wind energy adapting and exaggerating for their propaganda all familiar arguments of wind power opponents. The impact of sound emissions, for instance, is considered as bodily injury and wind farm operators are referred to as criminals deserving punishment. Foreign Minister Waszczykowski recently told German Bild newspaper that Poland doesn’t want to be part of a world made up of cyclists and vegetarians who only use renewable energy and fight all forms of religion.

From out of this attitude, new ideas are put forward that aim at cutting off the air of wind industry: absurd spacing guidelines including decommissioning obligation for facilities that do not meet these requirements, substantial additional tax burden for new and existing projects, mandatory technical inspections at short intervals for which unreasonably high fees are planned to be charged etc. In short: every effort is made to discredit the industry and to make wind energy an unattractive business. Fittingly, the scheduled first auction was canceled without committing to a new date.

In this hostile environment, amidst political crossfire and despite all announced future attacks on the industry the Polish wind energy conference took place last week. And although exhibitors and visitors showed concern about the irrationally acting government, it was also felt that everybody was determined not to get threatened by its destructive force. As if they would participate in a defiant demonstration, more companies had registered than in recent years, and also the number of visitors is likely to be increased.

In the talks the sober search for solutions and adaptable business models was in the foreground, Binotsch reports. BBB’s answer to the difficult market climate: "Whenever it comes to auctions, financing banks will appreciate wind assessment improved by LiDAR measurements. And turbine performance optimisations by means of nacelle-based LiDAR measurements are also of interest, because everybody wants to squeeze out their operating assets”. With a wink he adds that these products are going to gain importance next year in Germany as well.

Since 1996 BBB provides technical consulting services for the wind industry. BBB's engineers offer planning and engineering services all along the wind energy process-chain: from wind measurements and feasibility studies to construction supervision and the commissioning of the wind farm. Furthermore BBB has a considerable track record of technical due diligence provided on onshore as well as offshore projects.
BBB Umwelttechnik is accredited for the elaboration of bankable wind and yield assessment reports and the execution of high-quality wind measurements (ISO/IEC17025:2005).