The Quest Trend Magazine puts the actual September numbers from the Federal Statistical Office for the production in the German machinery industry into the context since the beginning of the world economic crisis. 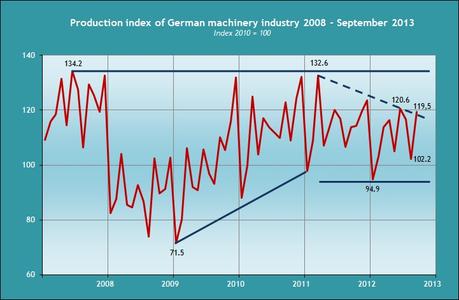 (PresseBox) ( Bochum, Deutschland, 13-11-13 )
Since 2010 production of machines clambered out from the crisis low of 71.5 index points reaching three times maximum values by 2012 without being able to exceed the pre-crisis level. In this period the production peak was 132.6 index points (March 2012).

Since then this upward movements have been replaced by an up and down resp. a sideways movement of the machinery production.

This large sideways movement is the current main trend. It becomes understandable with view of the sales markets of the German machinery industry:

The worldwide industrial production could also not exceed the pre-crisis level yet. Countries being important for the machine export are showing a mixed situation. Germany and the USA are moving close to their pre-crisis level while China, Mexico, Indonesia, Turkey, South Korea have clearly exceeded theirs; Russia, Brazil, India are stagnating; finally the EU countries are still far away from their pre-crisis level.

Within this large sideways movement a declining tendency in production shows up since the beginning of 2011. This is why the production high in June did not achieve with 120.6 index points that of the previous year (March 2012:136.6). Instead this January production marked a low with 94.9, which is below the lowest value of the previous year.

The Quest Trend Magazine specifies the outlook for the production in the German mechanical engineering industry.

The large sideways movement can only be overcome by the fact that production will exceed the pre-crisis level of 134.2 and then growing further.

The declining tendency of production within the sideways movement can only be broken through if production index soars over 120.6.

The link to the article is http://www.quest-trendmagazine.com/...