Relief or calm before the storm? New report about production and sales of the German machinery industry

Production and sales of German machinery industry also continued their sideways movement in November 2014. Their smaller fluctuation ranges in 2014 became apparent. The new report discovers: That often means calm before the storm. 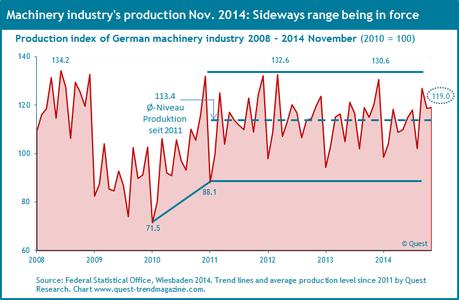 (PresseBox) ( Bochum, 15-01-14 )
According to the data of the Federal Statistical Office for November 2014 production slightly increased to 119.0 and sales to 129.6 index points. The multiyear analysis of both sizes since the beginning of the world economic crisis in the year 2008/2009 in the Quest Trend Magazine assigns these current data to the continuous sideways movement.

Production and sales swung from January to November 2014 compared to the previous year neither to new highs nor to lower lows. In fact, their fluctuation range has become smaller. A view on the charts of their courses since 2008 indicates that such reduced fluctuation ranges within the sideways ranges since 2011 (production) resp. 2012 (sales) functioned as preparatory stages for much larger peaks.

It is the global economic background, which shapes this development of the strongly export-oriented machinery industry. Currently the world economy indicates, as analyzed in the Quest Trend Magazine, a close entwinement of growth, stagnation and setbacks in the three important country regions, i.e. the industrialized countries, the BRIC and the MIST countries.

This mixed situation of growth, stagnation and setbacks in the world economy reflects itself in the development of the export-oriented machinery industry in 2014 hindering so far both a deeper sagging as well as a continuous growth of production and sales compared to the previous year. Hence quite larger fluctuations may arise.

A typical development of the world economy for the stage of crisis overcoming would be a unified growth of the worldwide industrial production. However, the close entwinement of growth, stagnation and setbacks indicates a non-typical development, affected by the three resp. four structural changes, which were already analyzed in the Quest Trend Magazine.

They are also leaving their mark on the stage of crisis overcoming in the German machinery industry.

The report is available in German and English language on http://www.quest-trendmagazine.com/...

Recommend Relief or calm before the storm? New report about production and sales of the German machinery industry press release