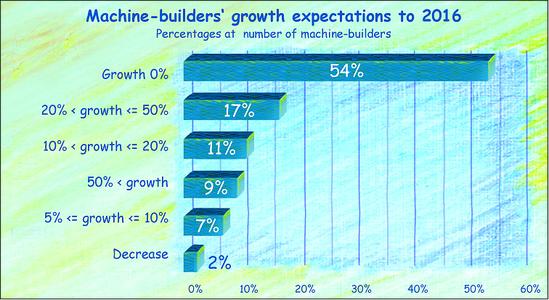 (PresseBox) ( Bochum, Deutschland, 13-10-07 )
This result showed a survey in the German machinery industry carried out by Quest TechnoMarketing about the use of servo-drives at the machines until 2016. The result of this part of the survey is now published in the Quest Trend Magazine.

An annual growth of 2.7% until 2016 means an increase of production of machines altogether by 11%.

The growth expectations represent a broad range of different values.

54% and thus the clear majority of the interviewed machine-builders expect that the annual production of machines will remain unchanged until 2016. This reluctant estimate crosses the ten investigated sectors of the machinery industry.

These reluctant expectations are connected with the economic situation in the machinery industry as the survey shows. Overall production in the machinery industry has been stagnating as the pre-crisis level has not been exceeded yet; within this stagnation a distinct up and down of production; briefly: growth since the beginning of 2010, but without boom, roller coaster in 2012 are creating a mix of expectations.

Against this background the clear majority of the machine-builders is stressing the stagnation that emerged from the up and down of production since 2011.

44% of the machine-builder connect their expectation with temporary growth tendencies, which show up in the up and down of the machine production. These machine-builders possibly see new prospects in certain export markets for their company strength profile. Or they hope to benefit in the future from the weaknesses of their competitors.

These growth expectations occur likewise in all investigated sectors. They concern above all machine-builders that are already producing a larger number of machines striving to increase these numbers still noticeably. That leads in six of ten investigated sectors to double digit growth rates until 2016. With three of these sectors the growth expectations are even above 20%.

With these results the new Quest study „The future of the use of servo drives until 2016 in the German machinery industry“ highlights the economic background for the changes in the use of servos and the total electronic drive technology. For this purpose 28% of the machine-builders in 10 sectors with 100 and more employees were interviewed.

The link to the article in the Quest Trend Magazine is http://www.quest-trendmagazine.com/...