IO-Link has been continuously growing in the German machinery industry since 2007, Quest Trend Magazine reveals

The implementation of IO-Link shows neither an erratic upward development nor a tough stagnation but a continuous, step by step spreading with more and more machine-builders in more and more sectors of the German machinery industry. 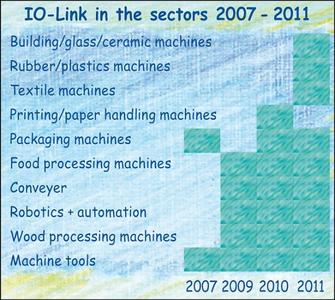 (PresseBox) ( Bochum, Deutschland, 11-05-26 )
IO-Link is a field bus-neutral interface, which makes the point-to-point connection between I/O modules and sensors able to communicate. The existing 2/3 wiring can be used. So any additional core for diagnosis and parameter settings of sensors becomes unnecessary. With analogue sensors IO-Link saves the analogue boxes. Also the screened cable often necessary with analogue sensors is omitted.

71% of 300 investigated machine-builders responded to these benefits of IO-Link with positive feedback in the year 2007. 1% of them already used IO-Link at that time.

Since then this portion increased to 7% in 2009, to 10% in 2010 and now to 12% this year. This indicates a continuous, step by step development that is quite typical for the careful implementation of a new technology.

At the same time machine-builders are using IO-Link in more and more sectors. This confirms that machine-builders are seeing a benefit in IO-Link that is intersectoral and related to different applications. Initially the two sectors machine tools and packaging machines belonged to the pioneer sectors in 2007, then since 2009 further sectors entered in addition such as wood processing machines, robotics + automation, conveyer and food processing machines.

The Quest Trend Magazine publishes in addition to these trends current statements by machine-builders to the implementation of IO-Link on http://www.quest-trendmagazin.de/....

Furthermore the Quest Trend Magazine publishes the report of a supplier from components to IO-Link, which documents various applications for IO-Link and the associated benefits. The link to this article is http://www.quest-trendmagazin.de/....

The trends to IO-Link are based on market surveys by Quest TechnoMarketing, Bochum, London, from the years 2007, 2009, 2010 and 2011. The current Quest study „What the machine-builders want to change in automation 2011“was accomplished in January/February covering scarcely 250 representative machine-builders. Highlights, table of contents and budget of the study on http://www.qtm.de/....

The print edition is dispatched to 4,500 selected personally addressed decision-makers of the automation technology in the machinery industry of Germany, Austria and Switzerland, in the automotive and F&B industry. It has 13,000 readers and enjoys an increased degree of attention due to its focus on trends in automation from users’ point of view.

The online edition publishes in English and German language current and long-term trends in automation, articles by machine-builders and manufacturers of automation technology. It is worldwide viewed in 74 countries.