In the wake of the world economic crisis export markets of the German mechanical engineering shifted from the European Union and the USA to the BRIC countries, particularly to China. This shift is again reversing as the new report points out. 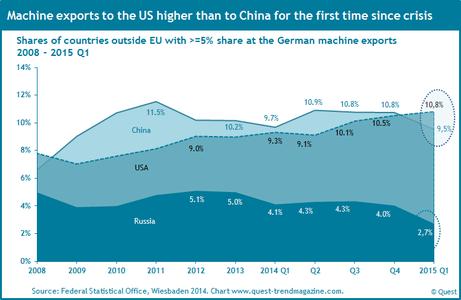 This shift is about to reverse aligning export markets to those export countries that were determining before the world economic crisis.

Clearest indication of this reversal is the redemption of China as most important export country for machines from Germany by the USA.

As a result of the world economic crisis China became fast the number one for machine exports outside of the EU. The export share achieved its maximum value with 11.5% in the year 2011 while that to the USA stood only at 8.1%, to the European Union at 45%.

During the process of the crisis overcoming industrial production in the USA and Germany exceeded its pre-crisis level. Although industrial production has been continuously growing in China, the export share to China has been stagnation since its maximum value in 2011 even having slipped to 9.5% in the first quarter 2015, its lowest value since 2009. At the same time export shares to the USA has been gradually rising from 8.1% to lastly 10.8%.

The exports to the EU achieved their highest value since 2011 with 48%.

The report refers to a further analysis in the Quest Trend Magazine, pointing out that export shares of German machines are lagging behind the development of industrial production in the export countries with exception of the USA.

The report suggests as explanation for this development that the demand for simpler machines in the developing export countries does not correspond to the main strength of the German machinery industry.

The report for the reversal of the export markets is available on http://www.quest-trendmagazine.com/...