The new Quest report specifies the crisis indicator, analyzes its course since the world economic crisis and applies it for six company size classes. Its results are different as obvious suggestions. 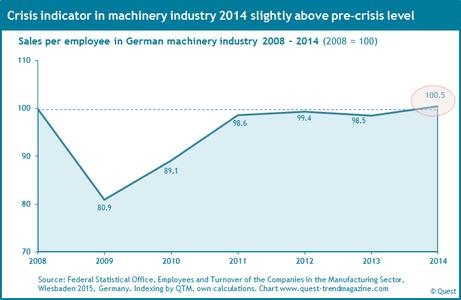 (PresseBox) ( Bochum, 15-06-30 )
The machine-builders have been hard struggling to overcome the impact of the world economic crisis. The report uses the turnover per employee in machinery industry as code number to measure the conditions of the crisis overcoming. The employees in the mechanical engineering companies operate with full commitment. The turnover, however, they generate depends considerably on the worldwide market conditions as impact of the world economic crisis. The data are provided from the Federal Statistical Office being more complete and more reliable than association statistics due to the legal obligation to register.

Six years after the outbreak of the world economic crisis, market conditions for mechanical engineering improved so far that the turnover per employee could increase its pre-crisis level in 2014. However, this succeeded only tightly as the crisis indicator reached 100.5 points provided the pre-crisis level is set to 100 points.

The report provides also the absolute values in euro of the crisis indicator. So the average turnover per employee stood at 225,197 euro before the outbreak of the world economic crisis. Six years later this value increased by 1,128 euro, i.e. by 0.5%.

The report differentiates the course of the crisis indicator regarding six company size classes of the German mechanical engineering. Suggestions, the small companies would lie below, the large ones, however, above the average level, are not confirmed. In fact, it turned out the opposite. Machine-building companies with fewer than 50 employees indicated a value of 101.5 points in 2014 while large companies with thousands and more employees reached 96.0 points.

Mechanical engineering companies with 500 to fewer than 1,000 employees could overcome best off the crisis. Their crisis indicator achieved the value 111.8 points.

The report summarizes that 43% of the mechanical engineering companies could exceed their pre-crisis level from six years ago in 2014.

The report is available on http://www.quest-trendmagazine.com/...