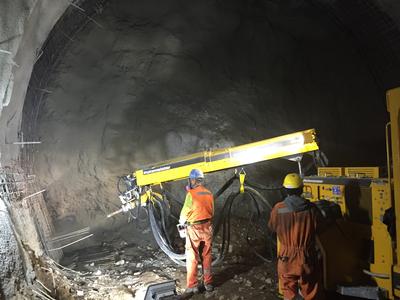 (PresseBox) ( Madrid, 16-02-01 )
The construction of line 6 in Santiago, which will link in previously disconnected neighborhoods through 16 new kms of network, is one of the key underground development projects in Chile´s capital.
Putzmeister Underground continues to support the underground construction industry in Latin America, working on site with its range of specially-designed underground shotcrete machinery.
Work on the project began in June 2013 and will join ten stations between Cerrillos y Providencia, opening to passengers from 2016.
“The building of the new line 6 for Santiago de Chile´s metro network is an important advance for the city, not only because it will make the network faster and more efficient, but because it will also link in neighborhoods like Cerrillos,” said Metro Development Projects Manager Jaime Adasme.
Obras Subterráneas S.A (OSSA), together with local group Echevarría Izquierdo, is working on the segments covering shafts, galleries and tunnel building in sections 3 and 4 with a total budget of 126 million €, which will help consolidate OSSA´s presence in Latin America.
Set up in 1952 in Spain, OSSA is focused in three segments: construction, energy and mining, and has quickly become a reference in underground construction. Since 2008, it has grown in Latin America, with a presence in Chile, Brazil, Colombia, Costa Rica, Nicaragua, Panama and Peru.
Building of segments 3 y 4 by EIOSSA
Together, EI and OSSA are working on the construction of shafts, galleries and tunnels belonging to segments 3 and 4 of line 6; the building of an inter-station of between 7 km and 65 m2 of section (4,5 km in segment 3 y 2,7 km in segment 4) as well as four 130 m2 stations.
Built based on the New Austrian Method, the initial mechanical excavation will be supported with shotcrete, trusses, bolts and mesh.
The project includes five auxiliary construction shafts: Marathon, Crecente Errázuriz and Hernán Cortes in segment three, together with Mar de Plata and Europa in segment 4. These shafts offer intermediary access to build the inter-station tunnels. They have a diameter of between 15-20 m, and depth of between 23-29 m, and will be built based on mechanical excavation in three segments of 2.3 ms depth each, which will be reinforce with a shotcrete layer of at least 30 cms and mesh.
The gallery and inter-station tunnels will be built as circular cross-sections that will allow for greater efficiency and safety, as well as trimming down costs. They will then be supported with primary and secondary shotcrete layers as well as mesh. The inter-station tunnels consist of a 5 cm sealing shotcrete layer, followed by mesh and lattice girder, a 10 cm filler layer and a secondary shotcrete layer of around 15 cms with mesh.
Work on the project, which started in 2013, is currently 98% complete, according to EIOSSA.

Both the SPM 500 Wetkret and the SPM 4120 Wetkret have a synchronized additive pump equipped with an automatic dosing device proportional to the concrete flow, thereby assuring spraying accuracy and quality.
The machines deployed in the Santiago metro Project are Dual Drive, and are able to work both in diesel and electric mode, ideal for those sections not yet connected to the electric grid.

Putzmeister Underground offers reliable and durable equipment for concrete spraying and transport in mines and tunnels, along with an extensive network of after sales and parts service worldwide.