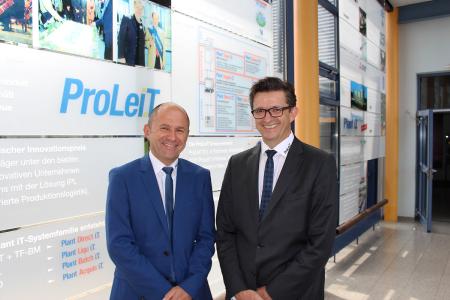 (PresseBox) ( Herzogenaurach, 16-06-16 )
ProLeiT AG is set to increase the number of directors on its Board to four on July 1, 2016. This is in response to the company's continued growth and to ensure it is well placed to meet the demands and challenges of the coming years.

Until now the fortunes of the Herzogenaurach-based Group with a network of a further four national and ten international offices have been in the safe hands of the two founders, Wolfgang Ebster and Manfred Czepl. The two entrepreneurs established the business in an Erlangen apartment back in 1986 and have managed to build up a workforce of 400 people over the past 30 years. Nonetheless, to enhance the benefits the company offers, particularly to its international customers, it is now the right time to make appropriate changes to the Group's management structures.

In spite of these necessary changes, the two founders will retain their existing roles and responsibilities on the Board. Wolfgang Ebster (56) will remain Financial Director and Chairman, and Manfred Czepl (59) Sales Director and Vice-Chairman. The technical management roles, which until now have been handled by the two founders, will be taken up by new members of the Board.

Jürgen Wölfl (50) will assume the role of Project Director and become responsible for the Group's rapidly growing and increasingly complex automation projects. His duties will include overseeing successful know-how transfer within the Group, the development of project management expertise and the recruitment and qualification of managers and staff for project-related issues. Furthermore, he will also be accountable for providing the very best care and support for valued customers and safeguarding the high quality of our projects.

Jürgen Wölfl studied Electrical Engineering at Friedrich-Alexander-University Erlangen-Nuremberg and graduated in 1992. He joined ProLeiT in 1995 and was initially employed as a project engineer for chemical and food plants. He was named project manager in 1996 and oversaw numerous projects in the said industries. He became team leader in the Chemical and Pharmaceutical department in October 1998 and then head of the department one year later. After restructuring of the company in 2001, he took up a new role as manager of the Pharma-ceutical, Food & Chemical department, which, over the years under his guidance, has grown to a staff of more than 70. In 2011, he became a member of the Executive Board, an executive committee which helps the Board of Directors with all aspects of managing the Group and prepares its members for a subsequent role in top management.

Josef Buchsteiner (51) will assume the role of Development Director and thus responsibility for further developing ProLeiT's extensive product portfolio. He undertook his studies at an Austrian polytechnic where he graduated with a degree in Electrical Engineering. He joined ProLeiT in 1986, four months after its foundation, and was, just like Jürgen Wölfl, initially employed as a project engineer. However, the focus of his work soon switched to developing software for the first process control systems supplied by ProLeiT GmbH, as the company was called at that time. He became deputy head of department in 1993 and was appointed head of the Brewery and Beverage Industry department in 1999. Josef Buchsteiner has been in charge of the Development department since 2006 and is responsible for developing core products (process control systems, MES systems, ERP connections, add-ons). He became a member of the Executive Board in 2010. In his role as Development Director, he will ensure the company continues and widens its high level of innovative output with the aim of providing products that offer our engineers, partners and customers sustained competitive advantages in their fields.